I Will Run Wild: The Pacific War from Pearl Harbor to Midway (Hardcover) 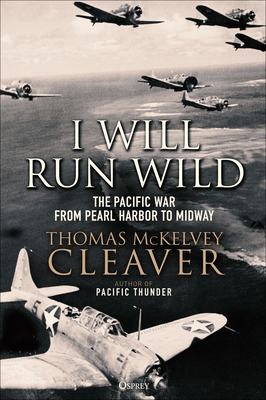 By Thomas McKelvey Cleaver
$30.00
Email or call for price.

This is a vivid narrative history of the early stages of the Pacific War, as US and Allied forces desperately tried to slow the Japanese onslaught that began with the sudden attack on Pearl Harbor in December 1941.

In many popular histories of the Pacific War, the period from the Japanese attack at Pearl Harbor to the US victory at Midway is often passed over because it is seen as a period of darkness. Indeed, it is easy to see the period as one of unmitigated disaster for the Allies, with the fall of the Philippines, Malaya, Burma, and the Dutch East Indies, and the wholesale retreat and humiliation at the hands of Japan throughout Southeast Asia.

However, there are also stories of courage and determination in the face of overwhelming odds: the stand of the Marines at Wake Island; the fighting retreat in the Philippines that forced the Japanese to take 140 days to accomplish what they had expected would take 50; the fight against the odds at Singapore and over Java; the stirring tale of the American Volunteer Group in China; and the beginnings of resistance to further Japanese expansion. In these events, there are many individual stories that have either not been told or not been told widely which are every bit as gripping as the stories associated with the turning tide after Midway.

I Will Run Wild draws on extensive first-hand accounts and fascinating new analysis to tell the story of Americans, British, Dutch, Australians, and New Zealanders taken by surprise from Pearl Harbor to Singapore that first Sunday of December, 1941, who went on to fight with what they had at hand against a stronger and better-prepared foe, and in so doing built the basis for a reversal of fortune and an eventual victory.

Thomas McKelvey Cleaver has been a published writer for the past 40 years, with his most recent work being the best-selling Osprey titles The Frozen Chosen (2016), Pacific Thunder (2017), Tidal Wave (2018), Holding the Line (2019), MiG Alley (2019), and I Will Run Wild (2020). He is also the author of Aces of the 78th Fighter Group and F4F Wildcat and F6F Hellcat Aces of VF-2, as well as Fabled Fifteen: The Pacific War Saga of Carrier Air Group 15 and The Bridgebusters: The True Story of the Catch-22 Bomb Group. During his 30 years as a screenwriter in Hollywood, he wrote the cult classic The Terror Within and worked as a supervising producer on a number of TV and cable series. He served in the US Navy in Vietnam and currently lives in Encino, California.

“Authoritative and colourful-a must-read account of the initial phase of the war in the Pacific.” —Kirkus Reviews, starred review

“I Will Run Wild paints a vivid picture of the first six months of the Pacific War, with the Japanese frantically trying to achieve a quick victory and the Allies desperately hanging on by their fingernails. Tom Cleaver deftly illustrates the strategy of the sprawling Pacific War through the stories of the men who staved off catastrophe and bought America time to strike back.” —Chris Bucholtz, author of Thunderbolts Triumphant: The 362nd Fighter Group vs. Germany's Wehrmacht

“We have all heard stories and details of the Japanese attack on Pearl Harbor, the Flying Tigers, the Doolittle Raid on Tokyo, and the Battle of Midway. All these have generated classic and modern movies that make us feel like we were there. We know all about this important history, or do we?…This valuable book details a compelling story of US and Allied forces, with antiquated airplanes, bravely facing combat-experienced Japanese pilots in superior airplanes. But the production might of the US quickly stepped up and supplied the new airplanes, carriers and pilots needed to turn the tide.” —Commander Curtis Dosé, US Navy (ret.)

“I Will Run Wild is a fascinating glimpse into the early days of the war in the Pacific. Meticulously researched, this is a compelling story of individual sacrifice against the backdrop of vast impersonal conflict, a work that stands shoulder to shoulder with the literary tradition of Herman Wouk and Samuel Eliot Morison.'” —Chief Warrant Officer Jim Wright, US Navy (ret.), and founder of www.stonekettle.com

"[E]xpertly captures the strained relationship between the U.S. and Japan prior to the attack on Pearl Harbor." - Flight Journal

"This book will reward those who read it slowly and in a contemplative frame of mind with a vivid sense of the aerial combat experience and fighting with no quarter." -Toy Soldier & Model Figure