Going Downtown: The US Air Force over Vietnam, Laos and Cambodia, 1961–75 (Hardcover) 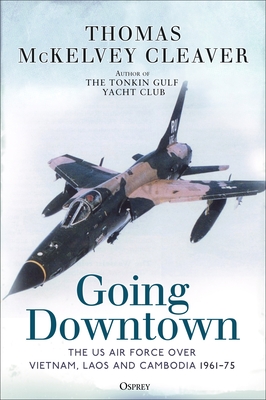 This vivid narrative history tells the full story of the US Air Force's involvement in the wars in the air over Vietnam, Laos and Cambodia.

The involvement of the US Air Force in the Southeast Asian Wars began in 1962 with crews sent to train Vietnamese pilots, and with conflict in Laos, and finally ended in 1972 with the B-52 bombing of Hanoi, though there were Air Force pilots unofficially flying combat in Laos up to the end in 1975. The missions flown by USAF aircrews during those years in Southeast Asia differed widely, from attacking the Ho Chi Minh Trail at night with modified T-28 trainers, to missions “Downtown,” the name aircrew gave Hanoi, the central target of the war.

This aerial war was dominated by the major air operations against the north: Rolling Thunder from 1965 to 1968, and then Linebacker I and II in 1972, with the latter seeing the deployment of America's fearsome B-52 bombers against the North Vietnamese capital Hanoi. These operations were carried out in the face of a formidable Soviet-inspired air defense system bristling with anti-aircraft guns and SAM missile sites. Beyond this, the US Air Force was intimately involved in secret air wars against Laos and Cambodia – one cannot speak of a war only in Vietnam regarding US Air Force operations. The war the Air Force fought was a war in Southeast Asia.

Following on from the same author's The Tonkin Gulf Yacht Club, which told the story of the US Navy's involvement in the Vietnam War, Downtown completes the picture. Featuring a wide range of personal accounts and previously untold stories, this fascinating history brings together the full story of the US Air Force's struggle in the skies over Southeast Asia.

Thomas McKelvey Cleaver has been a published writer for the past 45 years with his most recent work, Going Downtown (2022), being the latest addition to his best-selling Osprey titles The Frozen Chosen (2016), Pacific Thunder (2017), Tidal Wave (2018), Holding the Line (2019), MiG Alley (2019), and I Will Run Wild (2020). During his 30 years as a screenwriter in Hollywood, he wrote the cult classic The Terror Within and worked as a supervising producer on a number of TV and cable series. He served in the US Navy in Vietnam and currently lives in Encino, California.

“As ever, the author provides a sublimely distilled and perfectly readable account of a grueling period of history.” —Flypast

"A fascinating inside story of what it was like for pilots over south east Asia." - The Armourer

“An outstanding overview of the Air Force's war in Vietnam…This is combat history in the words of the aviators themselves… and shaped by the author's detailed archival research, oral history interviews, and a commanding knowledge of the available literature… [A] riveting account that constitutes at once both an outstanding history and a tribute to the airmen who flew across Southeast Asia more than a half-century ago.” —Dr Richard P Hallion, former Historian of the US Air Force and author of 'Rolling Thunder 1965-68: Johnson's Air War Over Vietnam'

“In Going Downtown Thomas McKelvey Cleaver provides a rare combination, a macro-micro view of the war in the air. In setting the context of Southeast Asian air operations, the author adroitly combines Vietnam history with some heart-pounding combat episodes.” —Barrett Tillman, author of 'Dragon's Jaw: An Epic Story of Courage and Tenacity in Vietnam'

“There are many “I was there” books telling the USAF story in Vietnam; but Going Downtown: The U.S. Air Force in Vietnam, Laos and Cambodia 1961–75 by Thomas McKelvey Cleaver paints a much broader picture of that air war. In this extensively researched and well written book, Cleaver gives you the action from the cockpits of both the North Vietnamese MiGs as well as the American jets. This book gives you the perspective of the decision makers in Washington, the generals in theater, and the pilots and crews in the cockpits. If you want to get a true understanding of USAF operations up North Going Downtown is for you.” —Thomas E. Rodgers, Lt.Col., USAF (ret.)