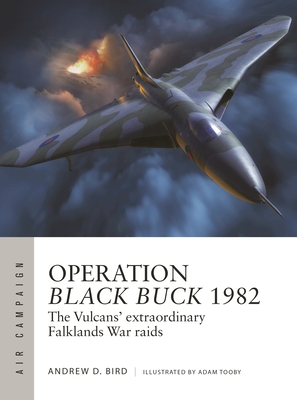 A newly researched, fully illustrated account of how RAF Vulcan bombers flew a series of the world's longest air raids in 1982 against Port Stanley airfield, in a daring, hastily improvised strike against the Argentinian invaders.

The RAF's opening shots of the Falklands War were among the most remarkable airstrikes in history. The idea was simple: to destroy the runway at Port Stanley, and prevent Argentinian fast jets using it against the Royal Navy task force. But the nearest British-owned airfield was Ascension Island - 3,900 miles away from the Falklands.

Researcher and historian Andrew D. Bird has uncovered new detail of what really made these extraordinary raids possible, including never-before-published information and photos demonstrating the discreet support provided by the United States. Packed with spectacular original artwork and rare photos, this book explains how these hugely complex, yet completely improvised raids were launched.

This is also the story of how the last of the Vulcans, only a few months away from the scrapyard, had to be hastily re-equipped to carry conventional bombs, with bombsights, electronics and navigation systems 'borrowed' from other aircraft. Yet they managed to fly what were the longest-range air attacks in history, and struck a severe blow to the occupying Argentinians.

Andrew D. Bird is a historian and a writer. The author of several histories on RAF maritime operations including most recently Heroes of Coastal Command, he has also presented and researched for television programmes on BBC, ITV, Channel 4, NRK1, Forces News and Sky History Channel. Andrew served in the RAF Reserves whilst working as an accomplished graphic designer, and as an exhibition designer at RAF Museum London. For more information on Andrew see andrewdbird.com or on Twitter @andydbird