Against the Tide: The best of Roger Scruton's columns, commentaries and criticism (Hardcover) 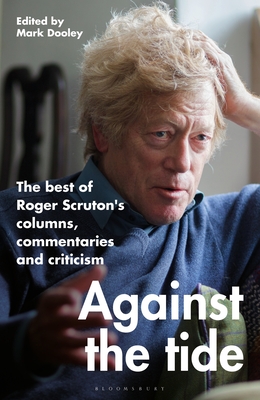 'His moral courage shines through from the start.' - Sunday Telegraph

The definitive edition of the late Sir Roger Scruton's philosophical and political essays and reviews, now collected in one volume.

The philosopher Roger Scruton was the leading conservative thinker of the post-war years. In this book are assembled the very best of his essays and commentaries, arranged thematically. The selection has been made and edited by Mark Dooley, Scruton's literary executor.

Throughout this collection, Scruton proves himself to be at his most scintillating and controversial. He writes with passion and conviction about such varied topics as feminism, racism, fascism, Tony Blair and Donald Trump, as well as subjects like global warming, music and architecture. He takes aim at those who defy conservative common sense in favour of liberal falsehoods.

This book shows Scruton at his most brilliant and demonstrates how his influence will remain strong and enduring.

Sir Roger Scruton is widely seen as one of the greatest conservative thinkers of the twentieth and twenty-first centuries and a polymath who wrote a wide array of fiction, non-fiction and reviews. He was the author of over fifty books.
A graduate of Jesus College, Cambridge, Scruton was Professor of Aesthetics at Birkbeck College, London; University Professor at Boston University, and a visiting professor at Oxford University. He was one of the founders of the Salisbury Review, contributed regularly to The Spectator, The Times and the Daily Telegraph and was for many years wine critic for the New Statesman. Sir Roger Scruton died in January 2020.

Mark Dooley has held lectureships in philosophy at the National University of Ireland, Maynooth, and at University College Dublin where he was also John Henry Newman Scholar in Theology. From 2003-2006, he wrote on foreign affairs for the Sunday Independent. From 2006-2018, he wrote a weekly column on 'Moral Matters' for the Irish Daily Mail. He is currently a Contributing Editor to The European Conservative magazine. He is author of The Politics of Exodus: Kierkegaard's Ethics of Responsibility (2001), The Philosophy of Derrida (2007), Roger Scruton: The Philosopher on Dover Beach (2009), Why Be a Catholic? (2011), Moral Matters: A Philosophy of Homecoming (2015), and Conversations With Roger Scruton (2016). He is editor of Questioning Ethics (1999), Questioning God (2001), A Passion for the Impossible (2003), The Roger Scruton Reader (2009), and Against The Tide: The Best of Roger Scruton's Columns, Commentaries and Criticism (2022). Dooley is Sir Roger Scruton's Literary Executor.

“Every piece is a masterclass in prose style and a reminder of how he earned such widespread popular affection…His moral courage shines through from the start.” —Sunday Telegraph

“This is inspirational thought delivered by graceful language about politics and aesthetics that will continue to attract and influence readers.” —The Epoch Times

"… A brilliantly stimulating selection of the journalism by the late Sir Roger Scruton… These are little masterpieces of philosophical polemic." - The Oldie

"The writings expertly collected in Against the Tide go a long way to illuminating Scruton's humane and dignified conservatism." - Law and Liberty

"On every page, the reader encounters a mind passionately at work, seeking to reconcile everyday problems with a moral sense." - The Washington Free Beacon

"Against the Tide is a concise but rich selection of some of Scruton’s writings for various journals, magazines, and newspapers … What a pleasure to see so many of these pieces back in print … it is hard to imagine a better introduction to Scruton’s work than this wonderful, endlessly readable volume." - Douglas Murray, The New Criterion

"Over 40 years of Scruton’s columns and commentaries, published and unpublished, as well as diary entries are gifted to us in this remarkably concise but substantive volume." - The American Conservative

"Reading Scruton will help us rekindle the search for what is good, true, and beautiful, and, more importantly, recognize them (and their opposites) when we see them." - The Interim