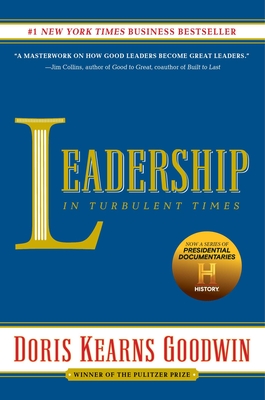 The inspiration for the multipart HISTORY Channel series Abraham Lincoln and Theodore Roosevelt.

“After five decades of magisterial output, Doris Kearns Goodwin leads the league of presidential historians” (USA TODAY). In her “inspiring” (The Christian Science Monitor) Leadership, Doris Kearns Goodwin draws upon the four presidents she has studied most closely—Abraham Lincoln, Theodore Roosevelt, Franklin D. Roosevelt, and Lyndon B. Johnson (in civil rights)—to show how they recognized leadership qualities within themselves and were recognized as leaders by others. By looking back to their first entries into public life, we encounter them at a time when their paths were filled with confusion, fear, and hope.

Leadership tells the story of how they all collided with dramatic reversals that disrupted their lives and threatened to shatter forever their ambitions. Nonetheless, they all emerged fitted to confront the contours and dilemmas of their times. At their best, all four were guided by a sense of moral purpose. At moments of great challenge, they were able to summon their talents to enlarge the opportunities and lives of others. Does the leader make the times or do the times make the leader?

“If ever our nation needed a short course on presidential leadership, it is now” (The Seattle Times). This seminal work provides an accessible and essential road map for aspiring and established leaders in every field. In today’s polarized world, these stories of authentic leadership in times of apprehension and fracture take on a singular urgency. “Goodwin’s volume deserves much praise—it is insightful, readable, compelling: Her book arrives just in time” (The Boston Globe).
Doris Kearns Goodwin’s interest in leadership began more than half a century ago as a professor at Harvard. Her experiences working for Lyndon B. Johnson in the White House and later assisting him on his memoirs led to her bestselling Lyndon Johnson and the American Dream. She followed up with the Pulitzer Prize–winning No Ordinary Time: Franklin & Eleanor Roosevelt: The Home Front in World War II. She earned the Lincoln Prize for the runaway bestseller Team of Rivals, the basis for Steven Spielberg’s Academy Award–winning film Lincoln, and the Carnegie Medal for The Bully Pulpit, the New York Times bestselling chronicle of the friendship between Theodore Roosevelt and William Howard Taft. She lives in Concord, Massachusetts. Visit her at DorisKearnsGoodwin.com or @DorisKGoodwin.
“Written in the companionable prose that makes Goodwin’s books surefire best sellers. . . . We can benefit from reminders that even flawed mortals can, in times of national emergency, achieve great things. We can only hope that a few of Goodwin’s many readers will find in her subjects’ examples a margin of inspiration and a resolve to steer the country to a better place.”—The New York Times Book Review

“A book like Leadership should help us raise our expectations of our national leaders, our country and ourselves.”—The Washington Post

“Goodwin’s volume deserves much praise — it is insightful, readable, compelling even — but the strongest compliment might be this: Her book arrives just in time.”—The Boston Globe

“After five decades of magisterial output, matching Pulitzer Prize-winning quality with best-selling appeal, Doris Kearns Goodwin leads the league of presidential historians. Insight is her imprint . . . Elegantly, she gathers the deeply researched strands of her big books to focus on the formative qualities of her White House heroes . . . The result is a fascinating study in contrasts, beautifully structured, as Goodwin alternates case studies of each president to examine the youthful roots of their ambition, their growth amid adversity, and their ultimate challenges.”—USA Today

“Published at a turbulent time, her book is a rich source of information and inspiration. . . . Most important, Goodwin reminds us that a democracy leadership is a two-way street, a mirror in which people, for better and worse, see their collective reflection.”—Minneapolis Star Tribune

“A masterwork on how good leaders become great leaders, how burning personal ambition can be elevated into driving ambition for a cause greater than self.  Riveting, uplifting, and incisive, Leadership is a culminating work of a true intellectual artist.”— Jim Collins, author of “Good to Great,” co-author “Built to Last”

“Business students invariably ask me: 'With what historical figure would you like to have lunch?' Doris Kearns Goodwin has prepared a marvelous banquet with four leaders whose lives provide lessons for all of us. Pull up a chair.”—Warren Buffett

“With Leadership, Pulitzer Prize winner Goodwin cements her reputation as a scholar with a remarkable ability to bring the complexities of our past to life for everyday readers. It’s a welcome gift indeed.”—Bookpage

“Leadership is a bravura performance by Doris Kearns Goodwin, an artist who writes today with the same level of excellence that she’s demonstrated for more than 40 years.”—Washington Independent Review of Books


“It’s as if she spent her entire career simply preparing to write this one volume. It was worth the wait. And well timed: If ever our nation needed a short course on presidential leadership, it is now.”—Seattle Times