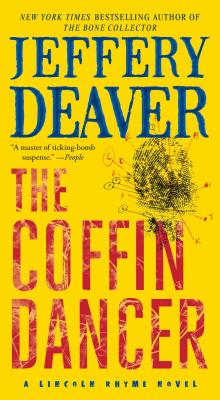 By Jeffery Deaver
$9.99
Email or call for price.

NYPD criminalist Lincoln Rhyme joins his beautiful protégée Amelia Sachs, in the hunt for the Coffin Dancer—an ingenious killer who changes his appearance even faster than he adds to his trail of victims. They have only one clue: the madman has a tattoo of the Grim Reaper waltzing with a woman in front of a coffin. Rhyme must rely on his wits and intuition to track the elusive murderer through New York City—knowing they have only forty-eight hours before the Coffin Dancer strikes again.

Jeffery Deaver is the #1 international bestselling author of more than forty novels, three collections of short stories, and a nonfiction law book. His books are sold in 150 countries and translated into 25 languages. His first novel featuring Lincoln Rhyme, The Bone Collector, was made into a major motion picture starring Denzel Washington and Angelina Jolie, and a hit television series on NBC.

He’s received or been shortlisted for a number of awards around the world, including Novel of the Year by the International Thriller Writers and the Steel Dagger from the Crime Writers' Association in the United Kingdom. In 2014, he was the recipient of three lifetime achievement awards. A former journalist, folksinger, and attorney, he was born outside of Chicago and has a bachelor of journalism degree from the University of Missouri and a law degree from Fordham University.