I Want to Be Where the Normal People Are (CD-Audio) 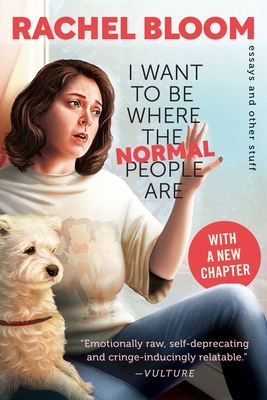 From the charming and wickedly funny co-creator and star of Crazy Ex-Girlfriend, a collection of hilarious personal essays, poems and even amusement park maps on the subjects of insecurity, fame, anxiety, and much more.
Rachel Bloom has felt abnormal and out of place her whole life. In this exploration of what she thinks makes her "different," she's come to realize that a lot of people also feel this way; even people who she otherwise thought were "normal."
In a collection of laugh-out-loud funny essays, all told in the unique voice (sometimes singing voice) that made her a star; Rachel writes about everything from her love of Disney, OCD and depression, weirdness, and Spanx to the story of how she didn't poop in the toilet until she was four years old; Rachel's pieces are hilarious, smart, and infinitely relatable (except for the pooping thing).

Rachel Bloom is a comedian, actress, writer, and singer based in Los Angeles. She created, co-executive produced, and starred in the TV series Crazy Ex-Girlfriend on the CW Network and earned both a Golden Globe and Critics Choice award for her performance. She has been named a comic to watch by Cosmopolitan, Time Out LA and Backstage Magazine, and has been featured in Variety and the LA Times. She will be writing the music and lyrics for The Nanny on Broadway.

"The stories have everything: Harry Potter fanfiction, deep thoughts about pooping, blow-by-blow accounts of fights with S&P during Crazy Ex-Girlfriend. I cracked up throughout, but what made it stick with me was her articulation of her anxieties. It was easy to see where and how in her life the beginnings of her work formed, and why certain experiences loomed large. All that, plus lyrics to songs she wrote about her former roommates! I'm telling you: It's good weird."—Mashable

"Whipsmart candor and disarming energy...Fans of her show and former and current nerds of all stripes will see themselves in Bloom's story. The end of Crazy Ex-Girlfriend has not dulled its fans' enthusiasm, and, really, anyone who made it out of adolescence alive will appreciate Bloom's insights."—Booklist

"If you loved Tina Fey and Amy Pohler's memoirs, don't sleep on this one from the creator and star of Crazy Ex-Girlfriend. Bloom's signature wit and honest voice shine through every word of this quirky, laugh-out-loud book that I read in one gut-busting sitting."—Good Housekeeping

"It's nice to know someone as talented as Rachel is also pretty weird. If you're like me and love Rachel Bloom, this hilarious, personal book will make you love her even more." —Mindy Kaling

"Rachel is one of the funniest bravest people of our generation and this book blew me away."—Amy Schumer

"Rachel Bloom looks at our 'normal' world through the point of view of a confused, hopeful alien with a huge heart and a raging, quirky creativity. I will never look at amusement park maps the same way."—Patton Oswalt

"Rachel Bloom is just that a person who has whole-y bloomed into a fiercely funny talent performer and now writer. Was that a corny sentence? Yes. Is this book corny? No. It's wild to read or think about people wanting so desperately to be normal. I'm so thankful Rachel never got to where the normal people are because we wouldn't be enriched with the art she has shared with the world. The book is f*cking funny and a breezy read and you're goofy as f*ck if you don't buy it."—Nicole Byer, author of #VERYFAT #VERYBRAVE

"(Rachel has) a legendarily active imagination with a predisposition for anxiety. Uh, sure you can put this quote on the back of your book I guess?"—Rachel's Psychiatrist