Coal, Cages, Crisis: The Rise of the Prison Economy in Central Appalachia (Paperback) 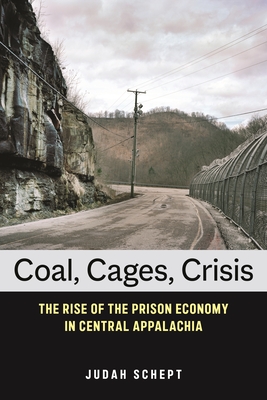 Coal, Cages, Crisis: The Rise of the Prison Economy in Central Appalachia (Paperback)

As the United States began the project of mass incarceration, rural communities turned to building prisons as a strategy for economic development. More than 350 prisons have been built in the U.S. since 1980, with certain regions of the country accounting for large shares of this dramatic growth. Central Appalachia is one such region; there are eight prisons alone in Eastern Kentucky. If Kentucky were its own country, it would have the seventh highest incarceration rate in the world. In Coal, Cages, Crisis, Judah Schept takes a closer look at this stunning phenomenon, providing insight into prison growth, jail expansion and rising incarceration rates in America's hinterlands. Drawing on interviews, site visits, and archival research, Schept traces recent prison growth in the region to the rapid decline of its coal industry. He takes us inside this startling transformation occurring in the coalfields, where prisons are often built on top of old coalmines, including mountaintop removal sites, and built into community planning approaches to crises of unemployment, population loss, and declining revenues. By linking prison growth to other sites in this landscape--coal mines, coal waste, landfills, and incinerators--Schept shows that the prison boom has less to do with crime and punishment and much more with the overall extraction, depletion, and waste disposal processes that characterize dominant development strategies for the region. Schept argues that the future of this area now hangs in the balance, detailing recent efforts to oppose its carceral growth. Coal, Cages, Crisis offers invaluable insight into the complex dynamics of mass incarceration that continue to shape Appalachia and the broader United States.
Judah Schept is Professor of Justice Studies at Eastern Kentucky University. He is the author of the award-winning Progressive Punishment: Job Loss, Jail Growth, and the Neoliberal Logic of Carceral Expansion.