The Book of Charlatans (Library of Arabic Literature #64) (Hardcover) 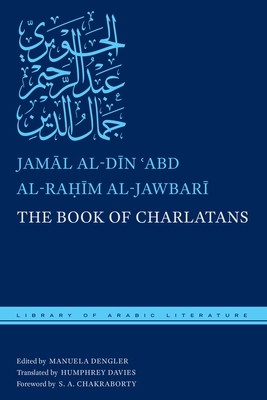 This is book number 64 in the Library of Arabic Literature series.

The Book of Charlatans is a comprehensive guide to trickery and scams as practiced in the thirteenth century in the cities of the Middle East, especially in Syria and Egypt. The author, al-Jawbarī, was well versed in the practices he describes and may well have been a reformed charlatan himself. Divided into thirty chapters, his book reveals the secrets of everyone from "Those Who Claim to be Prophets" to "Those Who Claim to Have Leprosy" and "Those Who Dye Horses." The material is informed in part by the author's own experience with alchemy, astrology, and geomancy, and in part by his extensive research. The work is unique in its systematic, detailed, and inclusive approach to a subject that is by nature arcane and that has relevance not only for social history but also for the history of science. Covering everything from invisible writing to doctoring gemstones and quack medicine, The Book of Charlatans opens a fascinating window into a subculture of beggars' guilds and professional con artists in the medieval Arab world. A bilingual Arabic-English edition.

Jamāl al-Dīn ʿAbd al-Raḥīm al-Jawbarī (Author) Jamāl al-Dīn ʿAbd al-Raḥīm al-Jawbarī (fl. early seventh/thirteenth century) was born in the Ghouta region near Damascus. He was the author of three texts, of which only The Book of Charlatans survives. Manuela Dengler (Editor) Manuela Dengler studied Arabic in Damascus and Cairo and received her Ph.D. in Oriental Philology and Islamic Studies from the University of Cologne (Germany). She is the author of the first text-critical edition based on a wide examination of the existing manuscripts of the Book of Charlatans by the thirteenth-century Syrian author al-Jawbarī, which she has now re-edited for the Library of Arabic Literature. Besides her research activity, she works in the fields of foreign cultural policy, the dialogue between Western and Muslim societies, and refugee policy. S. A. Chakraborty (Foreword by) S. A. Chakraborty is a speculative fiction writer from New York City. Her debut, The City of Brass, was short-listed for the Locus, British Fantasy, and World Fantasy awards. Humphrey Davies (Translator) Humphrey Davies is an award-winning translator of some twenty-five works of modern Arabic literature, among them Alaa Al-Aswany's The Yacoubian Building, five novels by Elias Khoury, including Gate of the Sun, and Aḥmad Fāris al-Shidyāq's Leg over Leg. He has also made a critical edition, translation, and lexicon of the Ottoman-period Brains Confounded by the Ode of Abū Shādūf Expounded by Yūsuf al-Shirbīnī, as well as editions and translations of al-Tūnisī's In Darfur and al-Sanhūrī's Risible Rhymes from the same era. In addition, he has compiled with Madiha Doss an anthology in Arabic entitled Al-ʿāmmiyyah al-miṣriyyah al-maktūbah: mukhtārāt min 1400 ilā 2009 (Egyptian Colloquial Writing: selections from 1400 to 2009) and co-authored, with Lesley Lababidi, A Field Guide to the Street Names of Central Cairo. He read Arabic at the University of Cambridge, received his Ph.D. from the University of California at Berkeley, and previous to undertaking his first translation in 2003, worked for social development and research organizations in Egypt, Tunisia, Palestine, and Sudan. He is affiliated with the American University in Cairo.