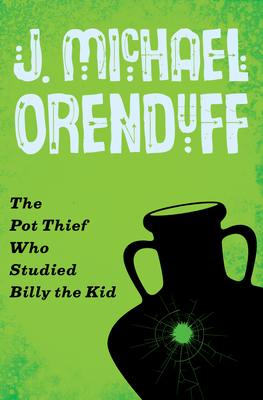 This is book number 6 in the Pot Thief Mysteries series.

This New Mexico pottery dealer skirts the law--and solves crimes: "Very humorous and delightful . . . with a questionable hero the reader can't help but love" (Kings River Life Magazine).
Although his work is technically illegal, Hubie Schuze has no qualms with digging up ancient Native American artifacts. The government calls him a thief, but Hubie thinks of himself as a treasure hunter--and his latest quest could be his last. After lowering himself into a cave in search of Anasazi pottery, Hubie uncovers a long-dead corpse, buried where the Anasazi would never have left a body. As he puzzles over this discovery, he hears a chilling sound: his truck, left behind on the cliff face, being driven away. Stranded in the cave, the pot thief has only a corpse to keep him company.
After a narrow escape, Hubie returns with his best friend, Susannah, to try to identify the dead man. What they find instead is a mystery that takes them back not to the days before Columbus, but to the Wild West of Billy the Kid.

The Pot Thief Who Studied Billy the Kid is the 6th book in the Pot Thief Mysteries, but you may enjoy reading the series in any order.