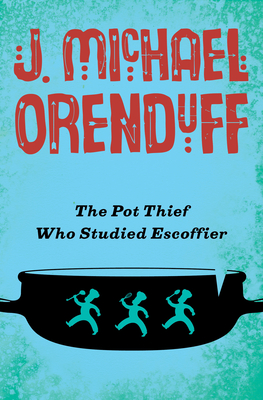 This is book number 4 in the Pot Thief Mysteries series.

The pot thief discovers that archaeology is not nearly as cutthroat as the restaurant business
A treasure hunter, pottery dealer, and occasional manufacturer of imitation American Indian artifacts, Albuquerque's Hubie Schuze knows quite a bit about throwing clay. But ancient Native American pottery is not really intended for dining, so he is puzzled when a restaurateur comes to him asking for dinner plates. The job sounds boring, but the fee does not: $25,000 for one hundred plates for a new Austrian restaurant in Santa Fe. The owner insists Hubie relocate to the area for the duration of the job in order to soak in the restaurant atmosphere as he works.
Hubie has dealt with his fair share of grave robbers, museum burglars, and cold-blooded killers, but nothing could prepare him for the infighting that goes on behind a kitchen's doors. When the cooks start croaking, the pot thief will have to move quickly to collect his fee, save the restaurant, and escape Santa Fe alive.
The Pot Thief Who Studied Escoffier is the 4th book in the Pot Thief Mysteries, but you may enjoy reading the series in any order.