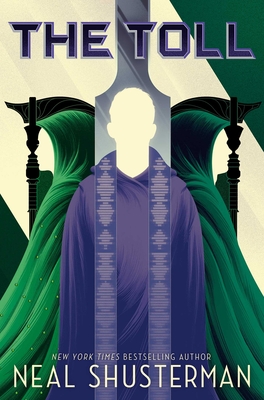 In the highly anticipated finale to the New York Times bestselling trilogy, dictators, prophets, and tensions rise. In a world that’s conquered death, will humanity finally be torn asunder by the immortal beings it created?

Citra and Rowan have disappeared. Endura is gone. It seems like nothing stands between Scythe Goddard and absolute dominion over the world scythedom. With the silence of the Thunderhead and the reverberations of the Great Resonance still shaking the earth to its core, the question remains: Is there anyone left who can stop him?

The answer lies in the Tone, the Toll, and the Thunder.
Neal Shusterman is the New York Times bestselling author of more than thirty award-winning books for children, teens, and adults, including the Unwind dystology, the Skinjacker trilogy, Downsiders, and Challenger Deep, which won the National Book Award. Scythe, the first book in his series Arc of a Scythe is a Michael L. Printz Honor Book. He also writes screenplays for motion pictures and television shows. Neal is the father of four, all of whom are talented writers and artists themselves. Visit Neal at StoryMan.com and Facebook.com/NealShusterman.