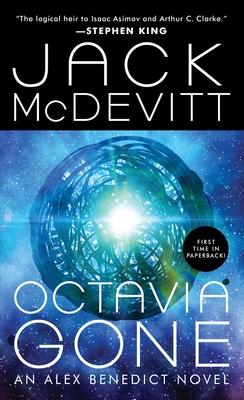 This is book number 8 in the An Alex Benedict Novel series.

From Nebula Award–winning author Jack McDevitt comes the eighth installment of the Alex Benedict series featuring Gabe triumphantly reuniting with Alex and Chase to retrieve a possible alien artifact—which may lead them to solve the greatest archaeological mystery of their careers.

After being lost in space for eleven years, Gabe has returned, and is trying to find a new life for himself after being presumed dead—just as Alex and Chase are relearning how to live and work with him. But when a seemingly alien artifact goes missing from Gabe’s old collection, a mystery is uncovered concerning its origins and it grants everyone an opportunity to dive into solving it as a team, once again.

When a lead on the artifact is tied to a dead pilot’s sole unrecorded trip, another clue leads to one of the greatest mysteries of the age: the infamous disappearance of a team of scientists aboard a space station orbiting a black hole—the Amelia Earhart of their time. With any luck, Alex, Chase, and Gabe may be on the trail of the greatest archaeological discovery of their careers.

Jack McDevitt is the Nebula Award–winning author of The Academy series, including The Long Sunset. He attended La Salle University, then joined the Navy, drove a cab, became an English teacher, took a customs inspector’s job on the northern border, and didn’t write another word for a quarter-century. He received a master’s degree in literature from Wesleyan University in 1971. He returned to writing when his wife, Maureen, encouraged him to try his hand at it in 1980. Along with winning the Nebula Award in 2006, he has also been nominated for the Hugo Award, the Nebula Award, the Arthur C. Clarke Award, the John W. Campbell Memorial Award, and the Philip K. Dick Award. In 2015, he was awarded the Robert A. Heinlein Award for Lifetime Achievement. He and his wife live near Brunswick, Georgia.