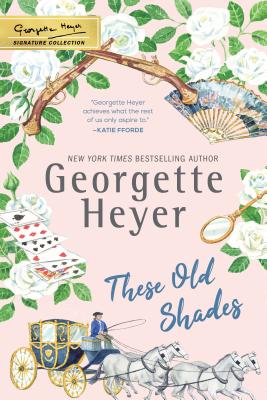 These Old Shades is considered to be the book that launched Georgette Heyer's career and helped usher her into becoming the Queen of Regency Romance. It features two of Heyer's most memorable characters: Justin Alastair, the Duke of Avon, and Leonie, whom he rescues from a life of ignomy and comes to love and marry.

A thrilling tale of long-awaited revenge...

The Duke of Avon is known for his coldness of manner, his remarkable omniscience, and his debauched lifestyle. Late one evening, he is accosted by a young person dressed in ragged boy's clothing running away from a brutal rustic guardian. The duke makes "Leon" his page. "Leon" is in fact Leonie, and she serves the duke with deep devotion. When he uncovers the true story of her birth, he wreaks an unforgettable revenge on her sinister father in a chilling scene of public humiliation.

What People Are Saying About These Old Shades:
"A story in the grand tradition of romance, where love...reclaims one thought to be beyond all hope of redemption."—STEPHANIE LAURENS, New York Times bestselling author

The Georgette Heyer Signature Collection is a fresh celebration of an author who has charmed tens of millions of readers with her delightful sense of humor and unique take on Regency romance. Includes fun and fascinating bonus content—a glossary of Regency slang, a Reading Group Guide, and an Afterword by official biographer Jennifer Kloester sharing insights into what Georgette herself thought of These Old Shades and what was going on in her life as she was writing.

Georgette Heyer's novels have charmed and delighted millions of readers for decades. English Heritage has awarded Georgette Heyer one of their prestigious Blue Plaques, designating her Wimbledon home as the residence of an important figure in British history. She was born in Wimbledon in August 1902. She wrote her first novel, The Black Moth, at the age of seventeen to amuse her convalescent brother; it was published in 1921 and became an instant success.
Heyer published 56 books over the next 53 years, until her death from lung cancer in 1974. Her last book, My Lord John, was published posthumously in 1975. A very private woman, she rarely reached out to the public to discuss her works or personal life. Her work included Regency romances, mysteries and historical fiction. Known as the Queen of Regency romance, Heyer was legendary for her research, historical accuracy and her extraordinary plots and characterizations. She was married to George Ronald Rougier, a barrister, and they had one son, Richard.