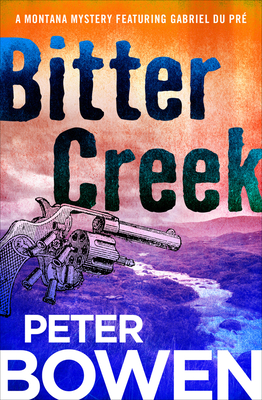 This is book number 14 in the Montana Mysteries Featuring Gabriel Du Pre series.

"Bitter Creek is likely the top of the Du Pr series . . . Lively and absolutely fascinating" (Jim Harrison, author of Legends of the Fall). Lt. John Patchen has come to Montana to persuade Chappie Plaquemines, his former gunnery sergeant in Iraq, to accept the Navy Cross. First, however, Patchen must find the wounded marine, who was last seen drinking heavily in the Toussaint Saloon. With the help of Gabriel Du Pr , who's romantically involved with Chappie's mother, he locates him soon enough, disheveled and stinking of stale booze. But a sobering visit to a medicine man's sweat lodge reveals a much greater mystery: The unsolved case of a band of M tis Indians who were last seen fleeing from Gen. Black Jack Pershing's troops in 1910, before disappearing. Strange voices within the sweat lodge speak of a place called Bitter Creek, where the M tis encountered their fate. To find it, Du Pr tracks down the only living survivor of the massacre, a feisty old woman whose memories may not be as trustworthy as they seem. But when Amalie leads Du Pr to Pardoe, an out-of-the-way crossroads north of Helena, he senses they're about to uncover long-buried secrets. Discouraged by the US military with their lives threatened by locals whose ancestors may have played a role in the murders, Chappie, Patchen, and Du Pr bravely pursue the truth so the victims of a terrible injustice might finally rest in peace. Bitter Creek is the 14th book in The Montana Mysteries Featuring Gabriel Du Pr series, but you may enjoy reading the series in any order.