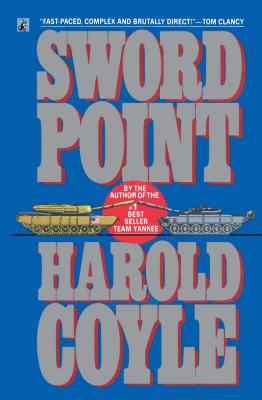 
Usually Ships in 1-5 Days
In the not-too-distant future, the Soviet Union invades Iran, and the United States hastily deploys its forces to push back the Red attack—despite Iran’s unrelenting hostility toward America.

The soviets unleash a massive attack on iran. America strikes back…

By sea, air and land, soldiers are plunged into a war of computerized guns and million-dollar killing machines on the bloody sands of Iran. But when the Soviet onslaught is stopped by a powerful American counter-attack, the superpowers are facing a greater danger. Iranian fanatics have a nuclear bomb—ready to explode.

In the Kremlin and the White House, in the raging battles on the sand, Sword Point gives us the fighters, the weapons and the terror that could be tomorrow’s war!
Harold Coyle is an American author of historical, speculative fiction and war novels including Team Yankee, a New York Times bestseller. He graduated from the Virginia Military Institute in 1974 and spent seventeen years on active duty with the US Army. He lives in Leavenworth, Kansas.