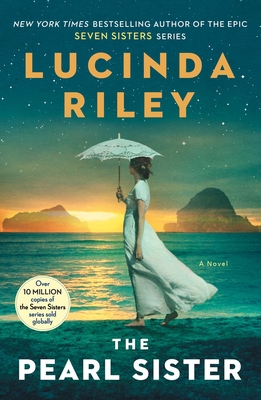 This is book number 4 in the The Seven Sisters series.

CeCe D’Aplièse has always felt like an outcast. But following the death of her father—the reclusive billionaire affectionately called Pa Salt by the six daughters he adopted from around the globe—she finds herself more alone than ever. With nothing left to lose, CeCe delves into the mystery of her origins. The only clues she holds are a black and white photograph and the name of a female pioneer who once lived in Australia.

One hundred years earlier, Kitty McBride, a Scottish clergyman’s daughter, abandons her conservative upbringing to serve as the companion to a wealthy woman traveling from Edinburgh to Adelaide. Her ticket to a new land brings the adventure she dreamed of and a love that she had never imagined.

When CeCe herself finally reaches the searing heat and dusty plains of the Red Centre of Australia, something deep within her responds to the energy of the area and the ancient culture of the Aboriginal people. As she comes closer to finding the truth of her ancestry, CeCe begins to believe that this untamed, vast continent could offer her what she never thought possible: a sense of belonging, and a home.

With Lucinda Riley’s signature “meticulous research and attention to detail” (Booklist), The Pearl Sister is an immersive saga that “will keep readers glued to the page” (RT Book Reviews).

Lucinda Riley was the New York Times bestselling author of over twenty novels, including The Orchid House, The Girl on the Cliff, and the Seven Sisters series. Her books have sold twenty million copies in thirty-five languages globally. She was born in Ireland and divided her time between England and West Cork with her husband and four children. Visit her website at LucindaRiley.com.

Praise for The Pearl Sister:

"Riley’s meticulous research and attention to detail immerse readers in historical background and bring CeCe and Kitty to life. Fans of Kristin Hannah, Kate Morton, and Riley’s previous novels will adore this."
— Booklist

“A unique dual timeline saga, rich with history and setting as well as emotion. This fourth book follows CeCe to discover her roots, as three of her sisters have done before her, but also to discover herself — and the journey is both heartwarming and heartbreaking. Riley has a distinct gift for setting, and as such the locales along CeCe’s travels come alive under her masterful pen. From the beaches of Thailand to the Australian outback to a London flat, the landscapes are vividly drawn and lushly atmospheric. The dual timeline aspect is seamlessly integrated with the story and will keep readers glued to the page, waiting to see how it all connects.”
— RT Book Reviews

“Brilliantly written. Reading like a stand-alone, it’s full of evocative details about cities, the countryside, flora, and fauna, which makes the scenes come alive. Separated by nearly a century, the characters’ storylines and dialogue are captivating and hold our interest...Highly recommended."
— Historical Novel Society

Praise for The Shadow Sister:

"Riley's engaging and mezmerizing story of self-discovery and love...can be perfectly read as a standalone. This book will appeal to readers of Edwardian novels and Jane Austen-style fiction."
— Library Journal (starred review)

"Set in the bucolic English countryside, this will appeal to fans of Kristin Hannah, Kate Morton, and Riley’s earlier novels."
— Booklist

"The Shadow Sister really is Lucinda's best yet. The scope of this series is breathtaking and each book is more captivating than the last"
— Iona Grey, author of Letters to the Lost

"A deliciously twisting plot with clues cleverly paced along the way. I could hardly wait to solve the mystery of Star's origins. Thoroughly addictive storytelling with a moving, emotional heart."
— Dinah Jefferies, author of The Tea Planter’s Wife

"Lucinda Riley is one of the strongest authors in this genre of historical fiction. Her ability to weave stories together, using modern-day and historical settings, is top-notich...excellent detail, heart-wrenching romance, and an engaging mystery."
— Historical Novel Society