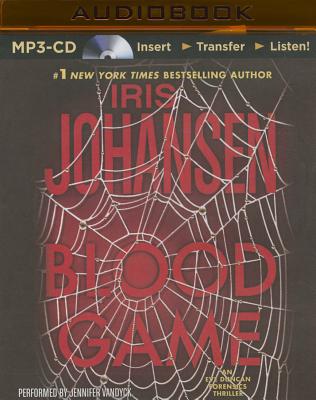 By Iris Johansen, Jennifer Van Dyck (Read by)
$9.99
Email or call for price.

This is book number 9 in the Eve Duncan series.

Eve Duncan is back Blockbuster New York Times bestselling author Iris Johansen's latest thriller brings Eve closer to discovering her daughter's killer...and into a web of danger from which she may not be able to escape...

Eve Duncan returns in a thriller that pits her against the most evil mind she has ever encountered: a ruthless killer who taunts her with his every move...and who has a special affinity for blood. When a Georgia senator's daughter is found murdered, and her body drained of blood, Eve Duncan is drawn into the web of Kevin Jelak--a serial murderer who is on Eve's short list of killers who might know something about her missing daughter Bonnie. When a goblet of blood is found in Eve's refrigerator, she knows the taunting is over...and the games have begun. As Eve and Jelak engage in a dance of death, Eve must call upon those she loves and trusts the most...even if it means bringing them into the game as well.