My Own Story: The Autobiography of Billy the Kid (Paperback) 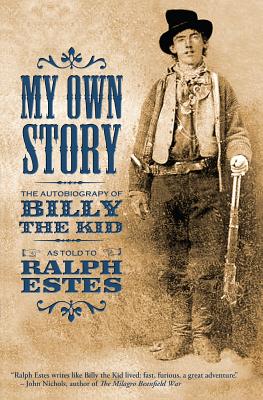 Everyone knows the saga of Billy the Kid. That story's been told, in an avalanche of books, songs, movies, TV programs. And yet - no one has given Billy's side. Until My Own Story: The Autobiography of Billy the Kid. Oh, there have been many claims that it wasn't Billy that Pat Garrett shot in Pete Maxwell's darkened bedroom on July 14, 1881. But in fact it was. Billy just didn't die then. With the help of loyal friends he played dead, was "buried" long enough for Garrett to leave, nursed back to health, made his way to Wichita, and under the name of Henry Carter became a leading rancher until cancer laid him low. And now: Billy tells his own story. What were his feelings and fears, his pleasures and regrets? What really happened, not the media and the movies' and Garrett's exaggerations. Just as Billy, as he lay dying in a care center, told it to a young Ralph Estes in 1951.

Ralph Estes is an author, amateur historian, and New Mexico State Chautauqua troubadour performing "Me and Billy" and other programs throughout the state. He is also an emeritus professor and author of eight trade books. Ralph lives with his wife Martha Burk in Corrales, New Mexico.