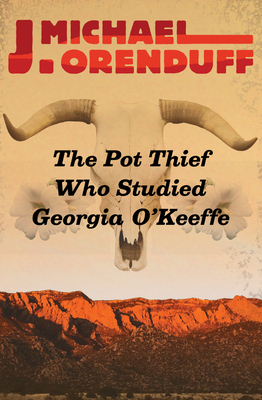 This is book number 7 in the Pot Thief Mysteries series.

This Southwest-set tale about a hunt for a precious relic offers a "nice mix of comedy and mystery" from an award-winning author (Booklist). A dealer in traditional Native American pottery, Hubie Schuze scours New Mexico in search of ancient treasures. The Bureau of Land Management calls him a criminal, but Hubie knows that the real injustice would be to leave the legacies of prehistoric craftspeople buried in the dirt. In all his travels across the state, there is one place that Hubie hasn't been able to access: Trinity Site at the White Sands Missile Range, where the first atomic bomb was detonated. Deep within the range are ruins once occupied by the Tompiro people, whose distinctive pottery is incredibly rare and valuable. When an old associate claims to have a buyer interested in spending big money on a Tompiro pot, Hubie resolves to finally find a way into the heavily guarded military installation. But Hubie has more on his mind than just outwitting the army's most sophisticated security measures. He's in love with a beautiful woman who has a few secrets of her own--and his best friend, Susannah, may have just unearthed a lost Georgia O'Keeffe painting. It's a lot for a mild-mannered pot thief to handle, and when his associate is murdered and Tompiro pots start replicating like Russian nesting dolls, Hubie suddenly realizes he's caught up in the most complex and dangerous mystery he's ever faced. The Pot Thief Who Studied Georgia O'Keeffe is the 7th book in the Pot Thief Mysteries, but you may enjoy reading the series in any order.