Reform of Offenses Relating to Rape, Sexual Assault, and Other Sexual Misconduct Under Uniform Code of Military Justice (Paperback) 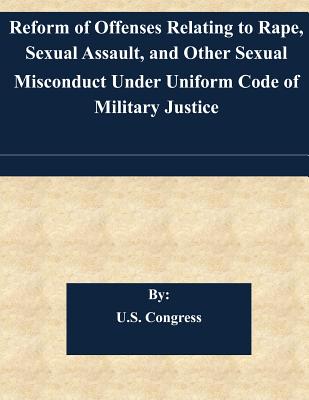 Reform of Offenses Relating to Rape, Sexual Assault, and Other Sexual Misconduct Under Uniform Code of Military Justice (Paperback)

By U. S. Congress


Usually Ships in 1-5 Days
The Uniform Code of Military Justice (UCMJ; chapter 47 of title 10, United States Code) constitutes the military's criminal code and judicial system for the trial of offenses by courts-martial. Pursuant to Article 36, UCMJ, the President is given rule-making authority to prescribe pretrial, trial, and post-trial procedures, including modes of proof, for cases arising under the UCMJ triable by courts-martial and other specified military tribunals. The President exercises this rule-making authority through Executive Orders that prescribe the Manual for Courts-Martial (Manual) and any amendments to the Manual deemed necessary. In 1984, Executive Order 12473 prescribed the Manual's rules and procedures and called upon the Secretary of Defense to cause the Manual to be reviewed annually and to recommend to the President any appropriate amendments. The Secretary of Defense causes this annual review to be conducted by a Joint Services Committee on Military Justice (JSC) operating under the direction of the General Counsel and pursuant to Department of Defense Directive 5500.17 to ensure that the UCMJ and Manual fulfill their fundamental purpose as a comprehensive body of military criminal law and procedure. The charter for the annual review process is to propose amendments, as necessary, to the Manual by proposed Executive Order or to the UCMJ by proposed legislation. The JSC and DoD is proposing a legislative amendment to Article 120, UCMJ, "Rape, Sexual Assault, and Other Sexual Misconduct." This proposal addresses the report and recommendation of the Defense Task Force on Sexual Assault in the Military (December 2009), that Article 120, UCMJ, be reviewed because "Practitioners consistently advised Task Force members that the new Article 120 (effective October 1, 2007) is cumbersome and confusing. Prosecutors expressed concern that it may be causing unwarranted acquittals. In addition, significant issues related to the constitutionality of Article 120's statutory affirmative defense of 'consent' and to lesser included offenses have evolved." This report and similar concerns with Article 120, as amended in 2007, have been raised with members of Congress and their staff, who are looking to DoD to address and remedy those concerns. This proposed amendment to Article 120, UCMJ, addresses those calls for prompt DoD action.