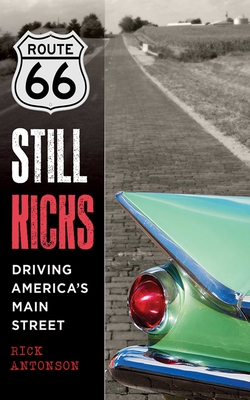 
Email or call for price.
“You’ll never understand America until you’ve driven Route 66—that’s old Route 66—all the way,” a truck driver in California once said to author Rick Antonson. “It’s the most famous highway in the world.”

With some determination, grit, and a good sense of direction, one can still find and drive on 90 percent of the original Route 66 today. This travelogue follows Rick and his travel companion Peter along 2,400 miles through eight states from Chicago to Los Angeles as they discover the old Route 66. With surprising and obscure stories about Route 66 personalities like Woody Guthrie, John Steinbeck, Al Capone, Salvador Dali, Dorothea Lange, Cyrus Avery (the Father of Route 66), the Harvey Girls, Mickey Mantle, and Bobby Troup (songwriter of “(Get Your Kicks on) Route 66”), Antonson’s fresh perspective reads like an easy drive down a forgotten road: winding, stopping now and then to mingle with the locals and reminisce about times gone by, and then getting stuck in the mud, sucked into its charms. Rick mixes hilarious anecdotes of happenstance travel with the route’s difficult history, its rise and fall in popularity, and above all, its place in legend.

The author has committed part of his book’s proceeds to the preservation work of the National Route 66 Federation.
Rick Antonson is the author of Route 66 Still Kicks: Driving America's Main Street, To Timbuktu for a Haircut: A Journey Through West Africa, Full Moon Over Noah's Ark: An Odyssey to Mount Ararat, and Walking With Ghosts in Papua New Guinea: Crossing the Kokoda Trail in the Last Wild Place on Earth. Rick is a past chair of Destination International, based in Washington, D.C. and past deputy chair of the Pacific Asia Travel Association based in Bangkok, and the former president and CEO of Tourism Vancouver. He and his wife Janice live in Predator Ridge in Canada’s Okanagan Valley.