Dershowitz Family Saga: A Century and a Half of Jewish Life in Poland,Through America, and Into Israel (Hardcover) 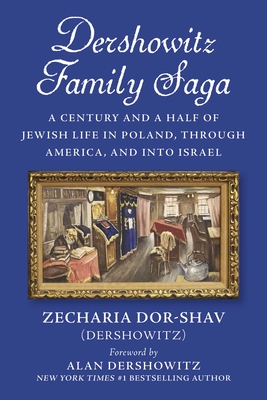 Dershowitz Family Saga: A Century and a Half of Jewish Life in Poland,Through America, and Into Israel (Hardcover)


Usually Ships in 1-5 Days
The Dershowitz Family Saga traces the significant modern events for world Jewry from the perspective of one immigrant family: their Galician origins in the 19th century; their Americanization and tribulations in the Goldene Medina; the tragedy of World War II and the Holocaust; the establishment of the State of Israel; the fall of communism; and the mass immigrations to Israel from Russia and Ethiopia. It takes the reader from Pilzno to the Lower East Side, from Brooklyn to Jerusalem. The aliyah of many family members before, during, and after the Six-Day War led to their involvement in the absorption of Ethiopian, Soviet, and former Crypto-Jews into the nascent state. The intellectual and spiritual heritage of the Dershowitz family is an American-Israeli success story.

The author's grandfather established the first Hassidic congregation in Brooklyn; his father conceived Yeshiva Torah Vodaath; a brother served on the European front but his gun ended up with the Haganah; his nephew is the outspoken civil libertarian and advocate of Israel, Alan Dershowitz.

A fascinating journey around the world through Zecharia Dor-Shav’s unique lens.
Rabbi Professor Zecharia Dor-Shav (Dershowitz) was educated in the nascent New York City Jewish day schools. Ordained an Orthodox rabbi in 1950, he served as a congregation rabbi, public school teacher, and Hebrew school principal for a number of years. After completing his Ph.D. at New York University in 1966, he took an appointment as Professor of Education at Long Island University. He was Director of the Eliezer Stern Institute for Research and Advancement in Religious Education for several years and served as chairman of the School of Education. A registered psychologist and member of the Israel Psychological Association as well as the Israel Education Association, he resides in Jerusalem, Israel.