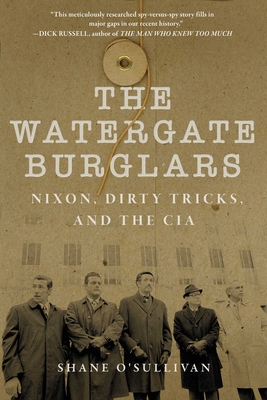 Fifty years after Watergate, researcher Shane O’Sullivan reveals the true story of the break-in in this chilling tale of political espionage and deception.

The victory of Richard Nixon in the US presidential election of 1968 swung on an “October Sur­prise”—a treasonous plot engineered by Anna Chennault and key figures in the Republican Party to keep the South Vietnamese government away from peace talks in Paris, costing thousands of American lives. The Nixon campaign got away with election “dirty tricks” in 1968, but four years later, they were caught.

Drawing on the CIA’s recently declassified history of Watergate and thousands of previously un­published documents, The Watergate Burglars (previously published as Dirty Tricks) is the definitive account of the men behind the break-in. O’Sullivan documents their ties to the CIA in unprecedent­ed detail, and how they implicated the Agency and the White House in three break-ins targeting Daniel Ellsberg and the Watergate offices of the Democratic National Committee, ultimately leading to Nixon’s downfall.

How did tapping the wrong phone with a bug that didn’t work lead to the burglars’ capture? Why was the bug on DNC official Spencer Oliver’s phone only found three months after the break-in? And why was the CIA agent inside the plot sent to Cuba on a double agent mission by American intelligence after he got out of prison? Now available for the first time in paperback just in time for the fiftieth anniversary of Watergate, this updated edition answers these questions and includes a wealth of new material: burglar James McCord’s final testament to his family about his role in the break-in, new revelations from whistleblower Alfred Baldwin, FBI case agent Angelo Lano, and the police officer who first identified McCord after his arrest and debriefed him in jail.

Shane O&rsquo;Sullivan is an Irish writer and filmmaker based in London. He holds a PhD in Film Studies from Roehampton University and is the award winning director of three documentaries: RFK Must Die: the Assassination of Bobby Kennedy, Children of the Revolution, and Killing Oswald. His work has been featured on the BBC and Netflix, and at the Interantional Documentary Festival Amsterdam. He is the author of several books, including the forthcoming Dirty Tricks: the Dark Side of Democracy.

“While we have fundamental disagreements about 'Watergate' and the Deep State agenda that shaped it, O’Sullivan is to be congratulated on an impeccably researched work of investigative reporting that adds greatly to our understanding of the affair and its mysteries."
—Jim Hougan, author, Secret Agenda

“Dirty Tricks goes well beyond anything yet published, in revealing the mysterious links between the Watergate scandal and the CIA. Was the bungled burglary part of an internecine effort to topple President Nixon? Was the cover-up for fear of secrets being divulged, from a Washington call-girl ring to the Kennedy assassination? This meticulously-researched book draws upon never-before-seen documents in addressing such questions, in a spy-versus-spy story that fills in major gaps in our recent history.”
—Dick Russell, author, The Man Who Knew Too Much

“Shane O’Sullivan’s new book on Watergate, Dirty Tricks, draws on the millions of records that have become available since 2016, chiefly from the CIA. Anyone interested in comparing that crisis with the present needs to consult the fresh information and perspectives in this well-researched and timely book."
—Peter Dale Scott, author, The American Deep State: Big Money, Big Oil, and the Struggle for U.S. Democracy

“This brilliantly researched book will bring back fond memories to those of us who, as was said at the time, wallowed in Watergate. It provides a new generation with the opportunity to relive this intense experience.”
—Alan Galbraith, attorney for the Democratic National Committee, 1972