The Moor, The Mason And The Alien: A Call To Action (Paperback) 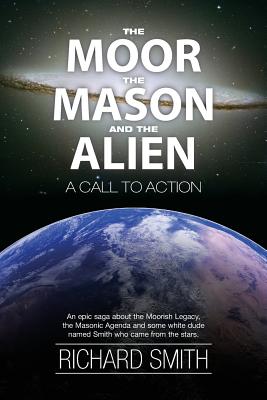 By Richard William Smith
$14.95
On Our Shelves Now

From the book: "Mother Earth had flung the star gates wide open this time. Coming out of the north, a messenger from the galactic community would reignite the fires of insurrection. Crossing the racial and sexual boundaries of lost knowledge and ancient wisdom, his words of sheer defiance would turn the tide against the transnational corporations and unite the ancient defenders of the throne."A visionary synthesis of alien contact, the Moorish Legacy, reincarnation and human origins, The Moor, The Mason And The Alien engages the reader with a radically ambitious scope of knowledge and wisdom, putting us on track with a magnificent interstellar experience through the paranormal and extraterrestrial terrains of ancient history, psychology, economics and current affairs. Ranging from the author's personal odyssey to the global issues we all face, Richard Smith serves up "a spiritual insurrection", an epic saga like no other representing the beginning of a new and riveting human adventure, taking the reader on an historical account of a global rebellion that begins with the Sasquatch going head to head with the Greys and transforms into the ancient Moorish Legacy of the Egyptian University System.Rooted in the extraterrestrial, paranormal and metaphysical experiences of the author himself, his path of awakening brings him face to face with an entity known as the Crone, a primordial relic of a much older galactic community. Representing an interstellar collective known as the Sisterhood, the Crone intentionally takes the author on an odyssey of self exploration into the human condition, forcing him to confront the reality of the Ancient Vendetta against humanity. Evolving into the 'Son of the Mother', his journey causes him to become the one person who realizes how to put it together. As the fate of Mother Earth hangs in the balance, the adventure escalates into a battle of wits pitting the Temple of Solomon and the Gene for Passion against the Corporate Titans of Orion in a global movement known as The Human Origins Revolution.The result of twenty years of paranormal experience, psychological analysis and metaphysical study of Earth's solar system and cosmology, The Moor, The Mason And The Alien provides a unique, unvarnished and revolutionary perspective on humanity's origins that is introspective, ethereal, apocalyptic and otherworldly all at the same time.RICHARD SMITH is an experiencer, author, international speaker and radio host on the topic of UFOs, the Moorish Legacy and related matters. He was born in Tampa, Florida, in 1970. He grew up in Farmingdale, New York, playing baseball, soccer and the piano while studying art, math, science fiction and the cosmos. He earned an Associate's degree in Advertising Art and Design and a Bachelor's degree in Visual Arts and Communication at New York State University. He also received the Certificate of Achievement Award, honored for Outstanding Achievement, at New York State University for his dedicated work with Extraterrestrial Intervention and Alien Abduction Phenomena. He is an alumnus of both Farmingdale and Old Westbury colleges. Since publishing his experiences on the subject of alien contact in 1999, Richard has travelled throughout the U.S. speaking to audiences.

Combining his passion for truth and justice with extraterrestrial intervention, ancient history and alien contact, artist, writer, media host and international speaker Richard Smith is best known for his groundbreaking lecture presentations on the Moorish Legacy, White Freemasonry, the Temple of Solomon and the Alien Abduction Phenomenon. Spanning a tremendous cross-cultural spectrum, Smith's lectures have inspired a wide range of people from multiple and diverse backgrounds while serving as a platform for a growing global movement that began in New Egypt, New Jersey, at the Earth Mysteries and UFO/ET Conference in 2005. An outspoken advocate for the victimized underdog, the paranormal, lost knowledge and ancient wisdom, Smith studied art and design at New York State University, focusing his studies on how to turn the medium of visual arts into a voice for those that have no voice with underlying social, political and historical themes. In 1995, he came on the scene with his first solo exhibition, "An Experiment in Humanity," at the Amelie A. Wallace Gallery, located at New York State's Old Westbury campus, in which he showcased his unique body of work including paintings, mixed-media sculpture, installation work and brass etchings. The exhibition represented a concept, perspective and approach that had not been seen before. Its success gave birth to a new persona for Smith in the paranormal and esoteric communities. Speaking publicly since the nineties, Smith presenting an educational and riveting journey through the Moorish Legacy, our global society, the galactic community and the family of man, Smith explores all things extraterrestrial, discussing the metaphoric, sociological and historical symbolisms therein and how they relate to the human condition. Attracting international recognition and interest, Smith was approached in 2013 by IBT's Talent Bookings Worldwide to be one of the premiere lecturers at the Human Origins Conference, an annual global touring event. Smith was also invited by the Moorish Science Temple of America to present his lecture in Toronto, Canada, at the Noble Drew Ali Day annual event in 2014. In June of 2015, he became a member of the Executive Committee for the New Mexico UFO and Paranormal Forum. Smith currently resides in Albuquerque, New Mexico, working on his third book. He is available for lectures and conferences both nationally and globally. Click here and contact him today for a speaking engagement.