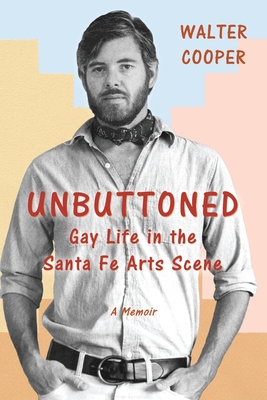 Where gays live, creativity thrives For over 100 years, the Santa Fe/Taos region of Northern New Mexico has nurtured a rich gay culture, yet most people have no idea what an enormous impact lesbians and gay men play, and have played, in shaping the art and cultural mecca of the American Southwest. Cooper's unbridled memoir takes you behind adobe walls and plunges you into the queer world that was Santa Fe artistic life in the 1970s, '80s, and '90s. It's packed with LGBT history, camp humor, fascinating anecdotes, 80 photographs, and the author's personal encounters with such cultural icons as Georgia O'Keeffe, Andy Warhol, Truman Capote, Norman Rockwell, Buckminster Fuller, Tennessee Williams, Shirley MacLaine, and Elizabeth Taylor. But the heart of Cooper's story spotlights the regional painters, potters, writers, poets, photographers, designers, tastemakers, and opera people he's known and loved for 40 years. Cooper gives voice to a dynamic LGBT community that helps make "the City Different" truly different. And who better to write an inside look at an untold story than a closeted copywriter who left a 10-year career in New York and Tokyo with advertising giant J. Walter Thompson, then bid adios to the ad biz, packed up his dreams, headed West, kicked open the closet door, and became a full-time painter and printmaker. Cooper's artwork has been exhibited in major galleries and private and corporate collections. His work in graphic design includes book and record album covers, opera posters, wool rugs, greeting cards, and postage stamps. As the overheated 1970s gave way to the sobering '80s, Cooper's candid memoir traces his journey from those high-flying years in New York and Fire Island to his new life as a painter in high-desert New Mexico during a time of great transition, when Santa Fe itself was experiencing a tectonic shift from a quaint art colony to a cultural boom town. Written with wit and insight, Cooper describes his intimate journey of self-discovery, both as a gay man and a struggling painter. While striving to establish his own identity as a painter, he tells what it's like to risk everything to be an artist."Perhaps only Walter Cooper could unfurl this marvelous, queer cavalcade that was Santa Fe in its halcyon, gay heydays, before Stonewall, before AIDS, before 'gay pride'. Clearly, a great deal has been lost (dare we say 'innocence'?) while much more has been gained."--Jan Adlmann, art historian, author of "Contemporary Art in New Mexico.

Walter Kerr Cooper was born in Syracuse, New York, and received his B.A. in American Studies from Hobart College. After a 10-year career in New York City and Tokyo as a copywriter on major accounts with J. Walter Thompson, he left the advertising business and settled in Santa Fe, New Mexico, to pursue painting and printmaking full-time. His artwork has been exhibited in major galleries and private and corporate collections. His work in graphic design includes opera posters, book & record album covers, wool rugs, greeting cards, and postage stamps. He is the author and illustrator of two previous books: Briefs: A Virile Display of Verse Witty and Gay (Universe/Rizzoli); and Shards: Restoring the Shattered Spirit (HCI). Cooper and his partner Doug Bland live in a passive-solar house with their tabby Elsa in the countryside near Santa Fe.