Architecture of Life: Soviet Modernism and the Human Sciences (Paperback) 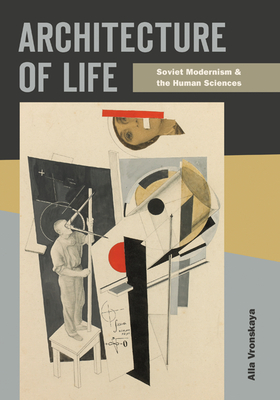 During the 1920s and 1930s, proponents of Soviet architecture looked to various principles  within the human sciences in their efforts to formulate a methodological and theoretical basis for their modernist project. Architecture of Life delves into the foundations of this transdisciplinary and transnational endeavor, analyzing many facets of their radical approach and situating it within the context of other modernist movements that were developing concurrently across the globe.

Examining the theories advanced by El Lissitzky, Moisei Ginzburg, and Nikolay Ladovsky, as well as those of their lesser-known colleagues, this illuminating study demonstrates how Soviet architects of the interwar period sought to mitigate Fordist production methods with other, ostensibly more human-oriented approaches that drew on the biological and psychological sciences. Envisioning the built environment as innately connected to social evolution, their methods incorporated aspects of psychoanalysis, personality theory, and studies in spatial perception, all of which were integrated into an ideology that grounded functional design firmly within the attributes of the individual.

A comprehensive overview of the ideals that permeated its expanded project, Architecture of Life explicates the underlying impulses that motivated Soviet modernism, highlighting the deep interconnections among the ways in which it viewed all aspects of life, both natural and manufactured.

Alla Vronskaya is professor of architectural history at Kassel University.

"Thanks to her attentive reading of early twentieth-century German and Russian theories, Alla Vronskaya has rewritten the history of the Soviet avant-garde. Revealing the deep roots El Lissitzky, Moisei Ginzburg, and others found in experimental psychology, in the theory of empathy, and in philosophical monism, she has masterfully recast a fundamental chapter in the making of modernity."—Jean-Louis Cohen, Institute of Fine Arts, New York University

"In her Architecture of Life, Alla Vronskaya resolutely abandons usual political binaries and familiar historical dichotomies that have long straightjacketed the history of socialist modernism. Bringing together Moscow and Berlin, Bauhaus and Constructivism, form and function, individuality and collectivity, she offers a historically rich and conceptually invigorating study of one of the most original architectural experiments of the twentieth century."—Serguei A. Oushakine, Princeton University