The Hidden History of Neoliberalism: How Reaganism Gutted America and How to Restore Its Greatness (The Thom Hartmann Hidden History Series #8) (Paperback) 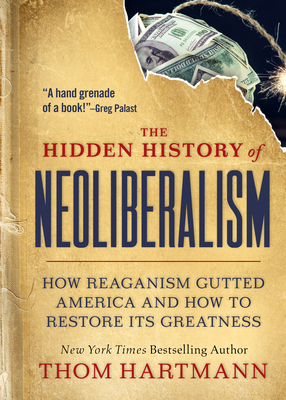 The Hidden History of Neoliberalism: How Reaganism Gutted America and How to Restore Its Greatness (The Thom Hartmann Hidden History Series #8) (Paperback)

This is book number 8 in the The Thom Hartmann Hidden History Series series.

America’s most popular progressive radio host and New York Times bestselling author Thom Hartmann reveals how and why neoliberalism became so prevalent in the United States and why it's time for us to turn our backs to it.

With four decades of neoliberal rule coming to an end, America is at a crossroads. In this powerful and accessible book, Thom Hartmann demystifies neoliberalism and explains how we can use this pivotal point in time to create a more positive future.

This book traces the history of neoliberalism—a set of capitalistic philosophies favoring free trade, low taxes on the rich, financial austerity, and deregulation of big business—up to the present day. Hartmann explains how neoliberalism was sold as a cure for wars and the Great Depression. He outlines the destructive impact that it has had on America, looking at how it has increased poverty, damaged the middle class, and corrupted our nation’s politics.

America is standing on the edge of a new progressive era. We can continue down the road to a neoliberal oligarchy, as supported by many of the nation’s billionaires and giant corporations. Or we can choose to return to Keynesian economics and Alexander Hamilton’s “American Plan” by raising taxes on the rich, reversing free trade, and building a society that works for all.
Thom Hartmann is a four‐time winner of the Project Censored Award, a New York Times bestselling author of over thirty books, and America’s #1 progressive talk radio show host for more than a decade. His show is carried on SiriusXM and radio stations nationwide and simulcast as television on Free Speech TV.
“This book details neoliberalism’s utter failure and its social, economic, and environmental devastation. The destabilization its policies have wrought have left our generation with the task to rebuild; and Hartmann’s book shows the way.”
—Leila Conners, founder and Director, Tree Media and Need to Know (N2K)

“Thom Hartmann makes it crystal clear how neoliberal free-market economics benefits monopolistic big business and the ultrarich while impoverishing our country and everyone else.”
—Earl Katz, progressive activist and Emmy-nominated documentary film producer

“This compact handbook nimbly recapitulates the political effects of neoliberalism as it percolated through world history. It allows the reader to clearly apprehend the outline of the beast.”
—George DiCaprio