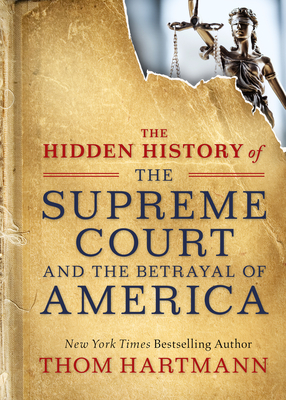 This is book number 2 in the The Thom Hartmann Hidden History Series series.

"Hartmann delivers a full-throated indictment of the U.S. Supreme Court in this punchy polemic." --Publishers Weekly

Thom Hartmann, the most popular progressive radio host in America and a New York Times bestselling author, lays out a sweeping and largely unknown history of the Supreme Court of the United States, from Alexander Hamilton's arguments against judicial review to modern-day debates, with key examples of cases where the Supreme Court overstepped its constitutional powers using the excuse of judicial review, and possible solutions.

Hartmann explains how the Supreme Court has spilled beyond its Constitutional powers in a series of rulings, including how it turned our elections over to American and foreign oligarchs with twin decisions in the 1970s, setting the stage for the very richest of that day to bring Ronald Reagan to power.

You'll hear the story of a series of Republican presidents who used fraud and treason to secure their elections, and how the GOP knew it but looked the other way because "the Court is hanging in the balance." A court that then went on to gut hundreds of pieces of progressive legislation, as Republicans had hoped.

Ironically, Hartmann points out, John Roberts (now the Court's Chief Justice), when he worked for Ronald Reagan in the 1980s, came up with a novel theory about how Congress could go around the Supreme Court. His goal was to effectively reverse Roe v. Wade and Brown v. Board, but in the process provides us with an elegant legal argument and legislative solution that could, in an emergency, be used by a progressive Congress and president to clean up much of the damage the Court has done in past decades.

Thomas Jefferson argued it is not the role of the Supreme Court to decide what the Constitution means, but rather the duty of the people themselves (and how they can do it). America may soon be forced to decide if it's going to continue to be governed as a constitutional monarchy, with nine unelected royals who have final say on everything, or if we are to revert to being a democratic republic as was largely the case before the late 1800s when America's first industrial era oligarchs corrupted the Court.
Thom Hartmann is a progressive national and internationally syndicated talk show host. Talkers Magazine named him America's #1 most important progressive host, and the host of one of the top 10 talk radio shows in the country every year for over a decade. A four-time recipient of the Project Censored Award, Hartmann is also a New York Times bestselling author of twenty-four books, translated in multiple languages.
“With this masterpiece on the Supreme Court, Thom—the brilliant author of many important books—surpasses himself. It should be required reading for every person who cares about the future of our planet.”
—John Perkins, New York Times bestselling author of The New Confessions of an Economic Hit Man

“Historian, legal scholar, and political analyst extraordinaire, Thom Hartmann presents a meticulously documented strategy for trimming the power of nine ideologically motivated political activists unaccountable to the will of the people. Hartmann’s most important and timely book to date.”
—David Korten, author of When Corporations Rule the World and Change the Story, Change the Future

“Thom Hartmann’s thoughtful analysis of the history of the Supreme Court provides a clear and actionable blueprint for how champions of principled democracy can work to evolve the court in ways that makes it more responsive, transparent, and accountable.”
—Garlin Gilchrist, Lieutenant Governor, State of Michigan

“Hartmann looks at the Supreme Court today as a tool of the right and their corporate interests. He reminds us that the Declaration of Independence promises ‘life, liberty, and the pursuit of happiness,’ not ‘property,’ and urges ‘we the people’ to lawfully subject SCOTUS to democratic governance.”
—Harvey J. Kaye, Professor of Democracy and Justice Studies, University of Wisconsin–Green Bay, and author of Thomas Paine and the Promise of America

“Thom Hartmann has created an elegant historical road map that reveals how one of the most influential judicial bodies on the planet evolved into such a powerful and mysterious entity.”
—Mike Papantonio, Host of America’s Lawyer

“Thom Hartmann provides a clear-eyed view of the right-wing assault on the courts -- and a principled vision for restoring justice for the many, not just the few.”
—Lee Fang, investigative journalist

“Thom Hartmann gives fascinating play-by-play coverage of the federal judiciary’s fall from the ‘most harmless branch’ of government to a clear and present danger to liberty and democracy. Do you want to understand how the plutocrats are trying to gavel down on We the People? Read. This. Book.”
—Alan Grayson, former member of Congress

“A brilliant, highly readable account of the least-understood democratic branch of our government, its growing power, and its hijacking by the right, this book is essential reading for anyone who’s concerned with the future of our democracy and the fate of our world.”
—Richard Eskow, writer, journalist, consultant, and broadcaster

“Hartmann has the amazing ability to bring important history to life. His new book is a must-read for people of all political persuasions to understand the history of the Court and its political impact. It is an eye-opener on the betrayal of America and what it means for our future.”
—Bob Ney, Political Analyst, Talk Media News, and former member of Congress

“In a provocative and easy read, Hartmann warns we have ceded enormous political and economic power to the wealthy classes, despite our founding fathers’ intention to place more corrective power in the hands of the electorate.”
—Bill Luther, former member of Congress

“Hartmann once again goes deep to understand the origin of the crisis in the Supreme Court, which didn’t stem from Trump alone. To understand the power of the Court, its dangerously dysfunctional state, and what you can do, read this book.”
—Dahr Jamail, author of The End of Ice