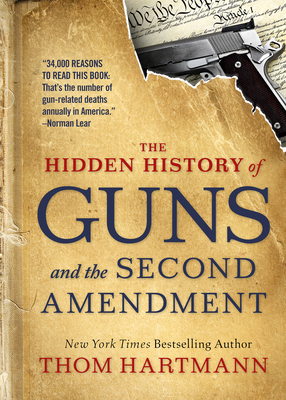 This is book number 1 in the The Thom Hartmann Hidden History Series series.

"In this precise primer on firearms practices and policies, progressive talk-show host Hartmann examines the history of routine gun usage and extreme gun violence and assesses the influence of gun ownership on contemporary political, economic, and social norms...A brief but powerful analysis of a searing national crisis." --Booklist

Thom Hartmann, the most popular progressive radio host in America and a New York Times bestselling author, looks at the real history of guns in America and what we can do to limit both their lethal impact and the power of the gun lobby.

Taking his typically in-depth, historically informed view, Hartmann examines the brutal role guns have played in American history, from the genocide of the Native Americans to the enforcement of slavery (Slave Patrols are in fact the Second Amendment's "well-regulated militias") and the racist post-Civil War social order. He shows how the NRA and conservative Supreme Court justices used specious logic to invent a virtually unlimited individual right to own guns, which has enabled the ever-growing number of mass shootings in the United States. But Hartmann also identifies a handful of powerful, commonsense solutions that would break the power of the gun lobby and restore the understanding of the Second Amendment that the Framers of the Constitution intended. This is the kind of brief, brilliant analysis for which Hartmann is justly renowned.
Thom Hartmann is a progressive national and internationally syndicated talk show host. Talkers Magazine named him America's #1 most important progressive host and the host of one of the top 10 talk radio shows in the country every year for over a decade. A four-time recipient of the Project Censored Award, Hartmann is also a New York Times bestselling author of twenty-four books, translated in multiple languages.
“34,000 REASONS TO READ THIS BOOK: That’s the number of gun-related deaths annually in America.”
—Norman Lear

“There is so much fascinating, I-didn’t-know-that history, my entire copy of Hidden History has turned yellow from highlighting stuff that’s cool, amazing, and vital. I didn’t know that Thomas Jefferson demanded passage of the Second Amendment so citizen militias would eliminate the need for our new nation to have a standing army. I didn’t know that the first big gun control campaign was the KKK’s seizing of weapons from black citizens, kicking off a century of Jim Crow. Hartmann, who lets us know he enjoys squeezing off a few rounds from a semiautomatic handgun, eschews the usual BS we hear from both the NRA and NPR. Guns kill, but in an America where most gun deaths are suicides, Hartmann proves with undeniable stats that the bullets are loaded by despair and inequality. Truly a tour de force in a quick read. I’m a gun control skeptic, but I'll admit, Hartmann’s book blew me away.”
—Greg Palast, Puffin Foundation fellow in investigative reporting and author of the New York Times bestseller The Best Democracy Money Can Buy

“In this riveting book, The Hidden History of Guns and the Second Amendment, Thom Hartmann exposes the searing social and human costs of a nation awash in firearms. Because it is impossible to understand the present without understanding the past, Hartmann shows how the history of genocide and slavery forms the bedrock of United States history and how the Second Amendment was ratified to preserve that racist framework. The book compellingly examines the myths at the root of modern American gun culture and how that culture emerged in reaction to social and economic changes in the United States, as well as savvy marketing and legal maneuvering by weapons manufacturers. As the humane journalist and thinker that he is, Hartmann makes sure to fuse history and the present by offering an array of realistic and ramifying solutions to ‘cure’ America of its gun violence epidemic.”
—Katrina vanden Heuvel, Editor and Publisher, The Nation

“Thom Hartmann’s new book on America and guns achieves the impossible: it is brief yet definitive. I couldn’t put it down. And now I can’t stop thinking about it.”
—Scott Carter, playwright (Discord, C.3.3) and Executive Producer, Real Time with Bill Maher

“Among the many hidden truths about our gun culture and politics Thom reveals are the prerevolutionary connections of guns and slave control, as well as guns and Native American genocide. Reading this book dispels the connections we all assume, that the Second Amendment was fundamentally about freedom versus the minority controlling the majority, racism triumphing over human rights. Most importantly, Thom tells us what we can do right now to move forward.”
—Larry Cohen, Chair, Our Revolution; Past President, Communications Workers of America; and Founding Chair, Democracy Initiative

“With The Hidden History of Guns and the Second Amendment, Thom Hartmann adroitly links the relationship of guns to slavery from Columbus through Reconstruction to racism in present-day America. He explains how common-sense gun regulation has dramatically reduced mass shootings, suicides, and other terrors of gun violence in countries like Australia. This book should be required reading for every legislator.”
—Earl Katz, political ethicist and Emmy-nominated documentary producer

“Ask yourself this: How did the United States, with 5 percent of the population, end up with 50 percent of all the guns, worldwide, in civilian hands? If you can’t answer that question, or if that statistic itself shocks you, then read Thom Hartmann’s brilliant The Hidden History of Guns and the Second Amendment. From our blood-soaked history to practical, proven solutions, the book is illuminating, infuriating, and motivating. It should be required reading for every high school student—and member of Congress.”
—Medea Benjamin, author and cofounder of CODEPINK

“Unfortunately, the debate about guns in the United States has been intractable and inflammatory. Thankfully, Thom Hartmann sets the score straight in his new book about firearms in America and the Second Amendment. One by one, he rips away the false narratives and myths about guns in the United States. This is a powerful book that is incisive as a stepping-stone to a new understanding about and approach to gun reform in the Wild West of nations.”
—Mark Karlin, founder of BuzzFlash.com and former Chairman and President, Illinois Council Against Handgun Violence

“It’s no surprise to anyone that Thom Hartmann is a prolific, brilliant, bestselling author and talk radio host. What is a surprise is when the man meets the moment so perfectly. That happens in his new book, The Hidden History of Guns and the Second Amendment.
“This profoundly personal yet typically insightful historical work so wonderfully encapsulates the pulse of our time and the sea change the Parkland kids and others have made in our national, and deadly, struggle with guns in America.
“Thom Hartmann is a national treasure, and so is this book.”
—Stephanie Miller, national radio host

“Political sloganeering aside, guns do in fact kill people. Tens of thousands of Americans are gunned down year after year in their homes, churches, schools, offices, cars, theaters, at birthday parties, playgrounds, music events—anywhere and everywhere. It’s a national plague directly traceable to a handful of corporate profiteers, gun lobby extremists, and gutless politicians. In this liberating book, Thom Hartmann exposes their scam and proposes a path to gun sanity.”
—Jim Hightower, populist radio commentator, syndicated columnist, and editor of the monthly newsletter The Hightower Lowdown

“There is a widely accepted false choice that either we protect the lives of our schoolchildren or we protect our freedom to own guns, but we can’t do both. If you want to understand how we’ve come to think in such black-and-white terms and how the debate over guns has become so polarized as to seem intractable, this book is for you. And if you want a sane, wise, and informed way to resolve the problem, this book is most definitely for you. Thom Hartmann is one of our most brilliant and most compassionate thought leaders. Read this book and you’ll be inspired and encouraged by practical answers and a true path forward.”
—John Robbins, bestselling author and cofounder and President, Food Revolution Network

“Hartmann has given us a riveting chronicle of the history of America’s gun culture. Hartmann at once unravels the anemic underpinnings of the deafening claims by gun rights advocates for constitutional sanction while showing how gun rights ideology, born from slavery, is rooted in racial hatred and tribalism manipulated by economic demands of racketeering gun manufacturers and their corporate and political allies.”
—Bobby Kennedy

“No one does a better job of rolling out the Constitution, opening up the historical records, and separating fact from fiction than Thom Hartmann. This book is brilliant. So brilliant that if every American were to read it and take its message to heart, the lies that are used to divide could lose their power. And we might just find the common ground that so frequently eludes us.”
—John Nichols, National Affairs Correspondent, The Nation

"Thom is the professor America needs. If people knew what he knows, we'd have a vastly different country. If you want to know anything and everything about the issue of guns in America, you have to read this book."
—Cenk Uygur, Host, The Young Turks and CEO, TYT Network