Trapped in Terror Bay: Solving the Mystery of the Lost Franklin Expedition (Hardcover) 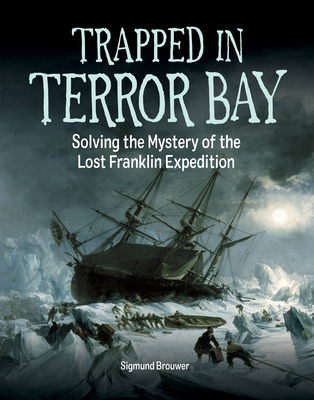 Trapped in Terror Bay: Solving the Mystery of the Lost Franklin Expedition (Hardcover)


Usually Ships in 1-5 Days
This enthralling and up close tale of the ill-fated Franklin expedition reveals bone-chilling details of what really happened in Terror Bay!

In 1845, Sir John Franklin's expedition set sail for the Arctic from England in search of the Northwest Passage from the Atlantic to the Pacific. Not only did they not succeed, his two ships --- HMS Erebus and HMS Terror --- and their entire party of 129 men vanished, their fate a mystery that remained unsolved for decades. In 10 suspenseful episodes, the thrilling tale of that doomed polar mission is told from the points of view of the commander of the Terror and of those back home and the search parties who attempted to find them. Each episode also describes some of the modern-day searches, including the discovery of the lost ships, allowing readers to examine the evidence and consider the theories about what happened. It's a thorough and thoroughly captivating read about an intriguing story from the past.

Award-winning author Sigmund Brouwer packs loads of information, including the most up-to-date findings, into this original and engaging narrative. The highly graphic design includes historic photos, maps, a timeline and illustrations plus modern photos. The book highlights the importance of Inuit oral history and knowledge in solving the mystery. It was reviewed by an Inuit interpreter and elder. Sidebars throughout contain fascinating information about how technology and inventions at the time of the expedition brought about social changes, and mini-mysteries from history that ask readers to solve them using forensic science. There are strong curriculum links here to history, geography, Inuit studies, engineering, technology and applied science.
Sigmund Brouwer is the bestselling author of scores of books across many genres, from early chapter books to historical fiction. He lives in Red Deer, Alberta.
“A standout title in the crowded field of Apollo 11 celebrations.”—School Library Journal (Praise for Moon Mission)

Thrilling, chilling reading for fans of historical disasters, particularly of the many that began as ventures into our planet's colder realms—Booklist, starred review

An entertaining trek, both concise and comprehensive, through a fascinating historic episode.—Kirkus Reviews

“For students who are curious to learn more about our early space program or technology development, this is an easy to read, comprehensible starting place.”—School Library Connection (Praise for Moon Mission)