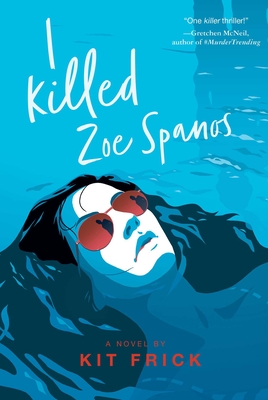 For fans of Sadie and Serial, this gripping thriller follows two teens whose lives become inextricably linked when one confesses to murder and the other becomes determined to uncover the real truth no matter the cost.

When Anna Cicconi arrives to the small Hamptons village of Herron Mills for a summer nanny gig, she has high hopes for a fresh start. What she finds instead is a community on edge after the disappearance of Zoe Spanos, a local girl who has been missing since New Year’s Eve. Anna bears an eerie resemblance to Zoe, and her mere presence in town stirs up still-raw feelings about the unsolved case. As Anna delves deeper into the mystery, stepping further and further into Zoe’s life, she becomes increasingly convinced that she and Zoe are connected—and that she knows what happened to her.

Two months later, Zoe’s body is found in a nearby lake, and Anna is charged with manslaughter. But Anna’s confession is riddled with holes, and Martina Green, teen host of the Missing Zoe podcast, isn’t satisfied. Did Anna really kill Zoe? And if not, can Martina’s podcast uncover the truth?

Inspired by Daphne du Maurier’s Rebecca, Kit Frick weaves a thrilling story of psychological suspense that twists and turns until the final page.
Kit Frick is a MacDowell Fellow and International Thriller Writers Award finalist from Pittsburgh, Pennsylvania. She studied creative writing at Sarah Lawrence College and received her MFA from Syracuse University. The author of the poetry collection A Small Rising Up in the Lungs and the young adult thrillers Before We Were Sorry (originally published as See All the Stars), All Eyes on Us, I Killed Zoe Spanos, Very Bad People, and The Reunion, Kit loves a good mystery but has only ever killed her characters. Honest. Visit Kit online at KitFrick.com and on Twitter and Instagram @KitFrick.
"A shivery delight"
— PEOPLE

"The YA thriller of the summer."
— Bustle

“An addictive sea-side thriller, I Killed Zoe Spanos is a tour de force! I have paper cuts all over my hands from turning these pages so fast.”
— Derek Milman, author of Scream All Night and Swipe Right for Murder

"Haunting, addictive, and simply unputdownable, I Killed Zoe Spanos is complex, nuanced, and full of twists and turns that will keep you turning the pages until the very end. This is a story that will stay with you long after you’ve finished."
— Amber Smith, New York Times bestselling author of The Way I Used to Be, The Last to Let Go, and Something Like Gravity

"With an addictive voice, expert storytelling, and a twist even I didn't see coming, I Killed Zoe Spanos is one killer thriller! Read. It. Now."
— Gretchen McNeil, author of Ten, Get Even, and #murdertrending

"I Killed Zoe Spanos is a dizzying, kaleidoscopic fever-dream of a novel. From its ‘did I read that right?’ opening pages, right through to an ending I truly didn’t see coming, this fantastic thriller left me breathless."
— Tom Ryan, author of Keep This to Yourself

“Strong heroines and an intriguing flip of whodunnit tropes will keep readers engaged to the surprising resolution.”
— School Library Journal

"A gripping…and tightly wound exploration of the price of secrets.”
— Booklist