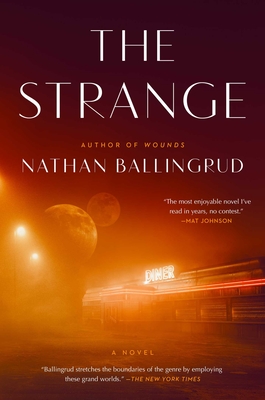 
Coming Soon - Available for Pre-Order Now
1931, New Galveston, Mars: Fourteen-year-old Anabelle Crisp sets off through the wastelands of the Strange to find Silas Mundt’s gang who have stolen her mother’s voice, destroyed her father, and left her solely with a need for vengeance.

Since Anabelle’s mother left for Earth to care for her own ailing mother, her days in New Galveston have been spent at school and her nights at her laconic father’s diner with Watson, the family Kitchen Engine and dishwasher as her only companion. When the Silence came, and communication and shipments from Earth to its colonies on Mars stopped, life seemed stuck in foreboding stasis until the night Silas Mundt and his gang attacked.

At once evoking the dreams of an America explored in Ray Bradbury’s The Martian Chronicles and the harder realities of frontier life in Charles Portis True Grit, Ballingrud’s novel is haunting in its evocation of Anabelle’s quest for revenge amidst a spent and angry world accompanied by a domestic Engine, a drunken space pilot, and the toughest woman on Mars.

Nathan Ballingrud’s stories have been adapted into the film Wounds and the Hulu series Monsterland, The Strange is his first novel.
Nathan Ballingrud was born in Massachusetts in 1970, but spent most of his life in the South. Ballingrud is the author of the collections North American Lake Monsters and Wounds: Six stories from the Border of Hell. He’s been awarded two Shirley Jackson Awards, and have shortlisted for the World Fantasy, British Fantasy, and Bram Stoker Awards. Among other things, he has been a cook on oil rigs and barges, a waiter, and a bartender in New Orleans. He now lives in North Carolina.
“Ballingrud stretches the boundaries of the genre by employing these grand worlds.”
— —The New York Times

“The most enjoyable novel I’ve read in years, no contest. Before The Strange, I never realized I wanted to be marooned on the dustbowl of Mars, joining an epic quest through ghost towns haunted by the living. Ballingrud is already a master of literary horror, his short stories consistently brilliant. But in his page-turner of a debut novel, that talent radiates brighter than ever before.”
—  ––Mat Johnson, author of Invisible Things and Pym

“Ballingrud’s brilliant fiction brims with imagination, integrity (I do not use that term lightly), and an authentic world-weary dread that bores directly into your heart.”
— —Paul Tremblay, New York Times bestselling author of The Cabin at the End of the World and The Pallbearers Club

“A definite page-turner. The writing is lovely and poetic and a perfect mix of well-written action and character.”
— —Rebecca Roanhorse, New York Times bestselling author of Black Sun

“Ballingrud is one of my favorite contemporary authors. His work is elegant and troublingly, wonderfully disturbing.
—  —Victor LaValle, award-winning author of The Changeling and Lone Women

"The Strange conjures a Bradbury-esque sense of childhood longing and creates a scrappy heroine that brings to mind True Grit, and yet it is utterly original and surprising. His wonderfully lyric work always feels as if it's part of a dream you once had and never told to anyone—yet somehow Ballingrud knows."
— —Dan Chaon, author of Sleepwalk

The Strange is an adventure tale of the best kind: an unusual setting with vivid characters and an unpredictable ending. With every turn of the page, I wondered what would happen next.”
— —Charlaine Harris, New York Times bestselling author of An Easy Death and the Sookie Stackhouse series.