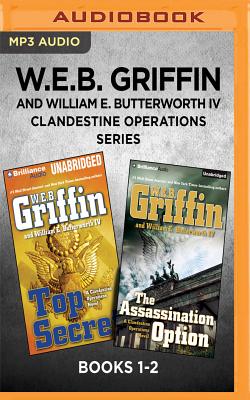 TOP SECRET
In the first weeks after World War II, a squeaky-clean new second lieutenant named James D. Cronley Jr. is recruited for a new covert enterprise that will eventually be transformed into something called the CIA. One war may have ended, but another one has already begun, against an enemy that is bigger, smarter, and more vicious: the Soviet Union. The Soviets have hit the ground running, and Cronley's job is to help frustrate them, harass them, and spy on them in any way he can. His recruiter thinks he has the potential to become an asset--though, of course, he could also screw up spectacularly. And in his first top-secret assignment, it looks like that's exactly what may happen. He's got seven days to extract a vital piece of information from a Soviet agent, but Cronley's managed to rile up his superior officers, and if he fails, it may be one of the shortest intelligence careers in history. There are enemies everywhere--and, as Cronley is about to find out, some of them even wear the same uniform he does.

THE ASSASSINATION OPTION
James Cronley thought he had done well--he didn't know he'd done this well. His first successful mission for the about-to-be-official new Directorate of Central Intelligence has drawn all kinds of attention, some welcome, some not. On the plus side, he's now a captain, promoted to chief, DCI-Europe, and in charge of a top-secret spy operation. On the minus side, a lot of people would like to know about that operation, including not only the Soviets but also his own Pentagon, as well as a seething J. Edgar Hoover. Cronley knows that if just one thing goes wrong, he's likely to get thrown to the wolves. As if that weren't enough pressure, complications are springing up on all sides. He's discovered a surprising alliance between the former German intelligence chief and, of all things, the Mossad. A German family whom Cronley never knew he had has suddenly, and suspiciously, emerged. And he's due for a rendezvous with an undercover agent against the Soviets known only as Seven-K. It's when he meets Seven-K that he gets the real surprise.