Climatenomics: Washington, Wall Street and the Economic Battle to Save Our Planet (Paperback) 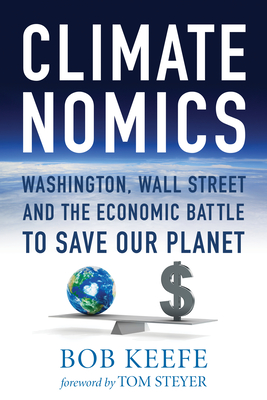 Climatenomics: Washington, Wall Street and the Economic Battle to Save Our Planet (Paperback)


Usually Ships in 1-5 Days
The battle against climate change is no longer just an environmental or social issue. As shareholders demand corporations protect assets against climate change and the economic impact of environmental disasters suck billions of dollars out of the economy, capitalism itself has become an ally. The economic impact of climate change is rattling the foundation of our economy at its very core. It's blowing up centuries-old industries from automobiles to oil and gas, creating new opportunities for investors and entrepreneurs. It's costing Americans billions of dollars each and every year. And most importantly, it's forcing politicians to pass long-overdue policies that will transform our businesses, our lives and our future like never before. The good news about this economic earthquake is that it just might be the thing that saves our planet. This is the first book to lay out how climate change has become an economic issue above all and how that has changed everything from the business to politics to the outlook for the future. Bob Keefe, executive director of E2, a national, nonpartisan organization dedicated to providing business perspectives on environmental issues, shows readers how this new reality will impact their industries, businesses, jobs, and communities and transform our country's economy. Climatenomics will be essential reading for anyone who cares about business, politics, or the future of our planet.
Bob Keefe is executive director of E2 (Environmental Entrepreneurs) a national, nonpartisan group of business owners, investors and professionals who leverage economic research and their business perspective to advance policies that are good for the environment and good for the economy. E2's national network includes more than 11,000 business leaders spread across nine chapters stretching from New York to Los Angeles, and a staff of advocates who work on climate and clean energy policies at the federal and state levels. As part of the Natural Resources Defense Council (NRDC), one of the world's biggest environmental groups with more than 3 million members and online supporters, E2 is the foremost business voice on issues at the intersection of the environment and economy, and the leading authority on clean energy jobs in America. Previously, Keefe spent nearly 25 years as a journalist, reporting for the Atlanta Journal-Constitution, the Cox Newspapers chain, the St. Petersburg Times, and the Austin American-Statesman. He resides in San Diego, California