We Keep the Dead Close: A Murder at Harvard and a Half Century of Silence (Paperback) 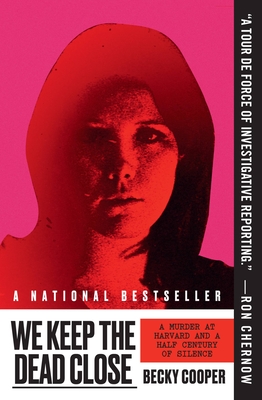 We Keep the Dead Close: A Murder at Harvard and a Half Century of Silence (Paperback)

“As much a journey for the writer as it is for the reader, this book solves a murder but leaves us with many unanswered questions. We Keep the Dead Close challenges us to question our assumptions as well as the paths we use to arrive at those assumptions. Delving into the academic culture of Harvard, the misogyny of the 1960s, and the burgeoning women’s rights movement, the story follows several threads, all of which have a significant impact on the life of Jane Britton, whose story is told with empathy, compassion, and five decades of curiosity.”
— Camille Kovach, Completely Booked, Murrysville, PA

“We follow Becky Cooper as she investigates the murder of a Harvard student from forty years ago. Not only are we trying to solve the mystery, we get a view of the secret world of Harvard. An addicting read true crime enthusiasts will enjoy!”
— Deanna Bailey, Story on The Square, McDonough, GA

Dive into a "tour de force of investigative reporting" (Ron Chernow): a "searching, atmospheric and ultimately entrancing" (Patrick Radden Keefe) true crime narrative of an unsolved 1969 murder at Harvard and an "exhilarating and seductive" (Ariel Levy) narrative of obsession and love for a girl who dreamt of rising among men.

1969: the height of counterculture and the year universities would seek to curb the unruly spectacle of student protest; the winter that Harvard University would begin the tumultuous process of merging with Radcliffe, its all-female sister school; and the year that Jane Britton, an ambitious twenty-three-year-old graduate student in Harvard's Anthropology Department and daughter of Radcliffe Vice President J. Boyd Britton, would be found bludgeoned to death in her Cambridge, Massachusetts apartment.   Forty years later, Becky Cooper a curious undergrad, will hear the first whispers of the story. In the first telling the body was nameless. The story was this: a Harvard student had had an affair with her professor, and the professor had murdered her in the Peabody Museum of Archaeology and Ethnology because she'd threatened to talk about the affair. Though the rumor proves false, the story that unfolds, one that Cooper will follow for ten years, is even more complex: a tale of gender inequality in academia, a 'cowboy culture' among empowered male elites, the silencing effect of institutions, and our compulsion to rewrite the stories of female victims. We Keep the Dead Close is a memoir of mirrors, misogyny, and murder. It is at once a rumination on the violence and oppression that rules our revered institutions, a ghost story reflecting one young woman's past onto another's present, and a love story for a girl who was lost to history.
Becky Cooper is a former New Yorker editorial staff member and Senior Fellow at Brandeis's Schuster Institute for Investigative Reporting. Her undergraduate thesis, a literary biography of David Foster Wallace, won Harvard's Hoopes Prize, the highest undergraduate award for research and writing. Research for this book was supported by the Fund for Investigative Journalism and the International Women's Media Foundation's Howard G. Buffett Fund for Women Journalists. She is also the author of Mapping Manhattan: A Love (and Sometimes Hate) Story in Maps by 75 New Yorkers (Abrams, 2013).

"As an undergraduate at Harvard, Cooper became obsessed with the unsolved murder of Jane Britton, an anthropology student there, in 1969. As Cooper was digging, new D.N.A. analysis eventually identified a suspect, but the real thrills of the story are the twists and turns that kept the killing a mystery for decades."—New York Times

“We Keep the Dead Close by Becky Cooper is a brilliantly idiosyncratic variant of generic true crime. . . While much that Cooper uncovers in her private pursuit of the case is fascinating in itself, not least her interviews with Lamberg-Karlovsky and other 'persons of interest' for whom the case of Jane Britton was never allowed to go cold, it is the revelation of the murderer that is most unexpected."—Joyce Carol Oates, New York Review of Books

"Cooper's resolve to excavate the truth about Britton's murder will keep a reader engaged enough to want to follow this case to its unexpected conclusion.”—NPR

“[E]xhaustive and extraordinary. . .The most noteworthy element of Cooper’s book might be its reportorial ambition. . .It is a testament to her skills as a writer that she is able to connect the threads of the cold case to larger cultural issues.”—The Washington Post

“When Ms. Cooper describes her war room, covered with 'theories and photos, a map of Iran, a blueprint of an apartment building, all stuck to my cork boards with dissection needles,' she sounds like Carrie Mathison of Homeland, flirting with the porous boundary between commitment and mania ... [Jane] is as tantalizing and as fleeting as her smile.”—The Wall Street Journal

“Becky Cooper’s gripping literary nonfiction debut. . .admirably avoids this mistake and never lets us forget the lived experience of Jane Britton ... a compelling portrait of a woman’s life cut short—as well as a fascinating exposé of a prestigious enclave within the country’s most elite institution. . .an engrossing, monumental work.”—USA Today

"Searching, atmospheric and ultimately entrancing, We Keep the Dead Close is a vivid account of a notorious murder at Harvard that had remained unsolved for fifty years, and a meditation on the stories that we tell ourselves about violence. Cooper is a methodical, obsessive and very companionable sleuth, who ushers us through the many twists and turns in her own investigation until she arrives at a solution. In a deft touch, she interrogates not just the evidence, witnesses and suspects, but her own biases and assumptions, as well."—Patrick Radden Keefe, New York Times bestselling author of Say Nothing

"I defy any reader to resist the hypnotic power of this Harvard whodunit. In a tour de force of investigative reporting, Becky Cooper guides us through a maze of academic politics and personal intrigue, her sleuthing laced with uncommon sensitivity and insight. Even as it engages us emotionally, this stirring narrative, with its heart-stopping finale, forces us to ponder the very nature of historical truth. A stunning achievement."—Ron Chernow, Pulitzer Prize-winning author

“[A] powerful, searching book. . .more ambitious than the run-of-the-mill true crime narrative seen so frequently these days. For one thing, Cooper is a stylish and fearless writer, relentlessly self-interrogating. She’s smart enough to examine her own motives in searching for the truth about Jane’s life.”—The Boston Globe

"A brilliantly constructed, wholly captivating investigation of an unsolved 1969 murder. We Keep The Dead Close has it all: Cats, capes, Ivy League politics, archeological excavation, an ax in the turtle tank. Best of all it has at its center a subtle, stubborn sleuth who reminds us not to confuse our facts with our stories. Stories are dangerous, Becky Cooper warns us, as well she should: This one is going to cost you at least one night's sleep."—Stacy Schiff, Pulitzer Prize-winning author of The Witches

"[T]his book succeeds as both a true-crime story and a powerful portrait of a young woman's remarkable quest for justice . . . An intricately crafted and suspenseful book sure to please any fan of true crime-and plenty of readers beyond."—Kirkus Review, starred review

"Mesmerizing debut...In addition to presenting a tense narrative, [Becky Cooper] delves into the phenomenon and morality of true crime fandom. This twist-filled whodunit is a nonfiction page-turner."—Publishers Weekly, starred review

"[A]n honest portrait of both the victim and those who loved her, as well as the cryptic, archaic world of academia.”—Vogue

"This is an astonishing book: circuitous yet taut with suspense, layered yet gripping. Cooper is one hell of a detective, chasing a long-buried murder mystery not only to the victim and her killer, but to the very core of how we understand one another. Most remarkable is how contemporary and vital every bit of questioning Cooper does here feels. Jane Britton died decades ago, but in Cooper's hands, Britton's tragic murder teaches us about ourselves and the dangers of the institutions we uphold."—Alex Marzano-Lesnevich, award-winning author of The Fact of a Body

"For decades, the acknowledged Big Three among True Crime books have been In Cold Blood by Truman Capote, Helter Skelter by Vincent Bugliosi and The Executioner's Song by Norman Mailer. Now it's the Big Four, because Becky Cooper's We Keep the Dead Close deserves inclusion in this exalted company. It's really that special."—Jeff Guinn, bestselling author of Manson: The Life and Times of Charles Manson and The Road to Jonestown: Jim Jones and Peoples Temple

"In her work of excavation, Cooper seeks ideas of power and truth, and the outer limits of our human desire to be present, somehow, in the past."—Booklist

"This book is as exhilarating and seductive as Harvard itself once seemed to Becky Cooper. Her examination-of a fifty-year-old unsolved murder, of her own obsession with it, and of the way our ideas about gender shape both academia and storytelling-is haunting, fascinating, and surprising. Cooper will keep you riveted."—Ariel Levy, New York Times bestselling author of The Rules Do Not Apply

"Becky Cooper rediscovered a baffling cold case, examined the evidence in exquisite detail, and forced new information into the light-ultimately yielding a book that is a stunning blend of academics, archaeology, eccentricity, memoir, and murder. I read this book in astonishment, grateful for fly-on-the-wall access to Cooper's narrative quest to document what happened to Jane Britton. This vivid, graceful story is as much about obsession and a search for belonging as it is about the romance of exploration, the unglamorous logistics of scientific fieldwork, the secretiveness of clans, the cruelty of chance, and the doggedness inherent to the best narrative journalism. Cooper's determination to chase every angle, track every fact, thrills and inspires me. She pursued this story with the kind of reportorial care and relentlessness that should drive all such work. Cooper reminds us that this isn't television: homicide cases involve real victims, real suffering. In pushing for clarity, she challenges powerful players-and returns, to a brilliant young woman, her voice."—Paige Williams, author of The Dinosaur Artist

"We Keep the Dead Close is part true crime, part memoir, part re-creation of the vast, compelling, disappointing investigative process... While the book is wide-ranging, there are no purposeless tangents. Instead, we are given a portrait of the kind of world Jane lived and died in, granting us both an understanding of Jane and the myths that her murder created."—Shelf Awareness

"At once a mystery, a memoir, and a look at women's experiences in hallowed halls and seems poised to become required reading in Cambridge and far beyond."—Town & Country

"We Keep the Dead Close is the most amazing true crime book I have read where the identity of the person responsible was not revealed until the end. It's the true crime story everyone will be talking about next year."—BookRiot

"[A] fascinating, haunting book, which Cooper has been working toward writing for the last 10 years, sifting through old documents, debunking baseless rumors, and compiling a picture of an academic world that is ruled by an archaic and highly gendered code of conduct, one that prioritizes ambitious men, and punishes similar women."—Refinery29

"A mournful and philosophical dive into a university culture that set the stage for a heinous crime, and a lyrical entry in the new subgenre of victim-focused true crime."—CrimeReads