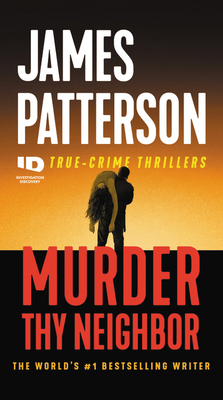 This is book number 4 in the ID True Crime series.

As seen on ID, these two true-crime thrillers follow a neighbors' quarrel that turns violent and cyber-bullying that explodes in a double murder.

Murder Thy Neighbor: Ann Hoover is a nice woman but she's come to hate her neighbor. Roy Kirk moved in next door with plans to renovate. But as the weeks go by, his DIY construction turns to shambles. When Ann takes him to court, Kirk's retaliation will be shockingly gruesome (with Andrew Bourelle).

Murder IRL: Jenelle Potter has always been better at connecting with people through social media. With overprotective parents, she hasn't had very many options to meet people, until she links up with Billy. But her feelings for Billy are unreciprocated, causing Jenelle to start a virtual war—a war that enters the real world (with Max DiLallo).
James Patterson is the world's bestselling author and most trusted storyteller. He has created many enduring fictional characters and series, including Alex Cross, the Women's Murder Club, Michael Bennett, Maximum Ride, Middle School, and I Funny. Among his notable literary collaborations are The President Is Missing, with President Bill Clinton, and the Max Einstein series, produced in partnership with the Albert Einstein Estate.

Patterson's writing career is characterized by a single mission: to prove that there is no such thing as a person who "doesn't like to read," only people who haven't found the right book. He's given over three million books to schoolkids and the military, donated more than seventy million dollars to support education, and endowed over five thousand college scholarships for teachers. For his prodigious imagination and championship of literacy in America, Patterson was awarded the 2019 National Humanities Medal. The National Book Foundation presented him with the Literarian Award for Outstanding Service to the American Literary Community, and he is also the recipient of an Edgar Award and nine Emmy Awards. He lives in Florida with his family.