The Greeks: A Global History (Hardcover) 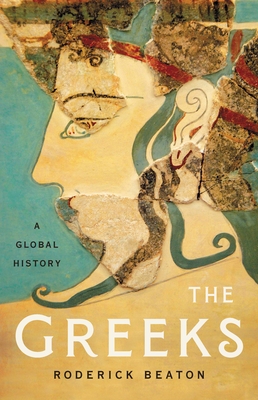 The Greeks: A Global History (Hardcover)


Usually Ships in 1-5 Days
A sweeping history of the Greeks, from the Bronze Age to today

More than two thousand years ago, the Greek city-states, led by Athens and Sparta, laid the foundation for much of modern science, the arts, politics, and law. But the influence of the Greeks did not end with the rise and fall of this classical civilization. As historian Roderick Beaton illustrates, over three millennia Greek speakers produced a series of civilizations that were rooted in southeastern Europe but again and again ranged widely across the globe.

In The Greeks, Beaton traces this history from the Bronze Age Mycenaeans who built powerful fortresses at home and strong trade routes abroad, to the dramatic Eurasian conquests of Alexander the Great, to the pious Byzantines who sought to export Christianity worldwide, to today’s Greek diaspora, which flourishes on five continents. The product of decades of research, this is the story of the Greeks and their global impact told as never before.
Roderick Beaton is an Emeritus Professor at King’s College London and Commander of the Order of Honor of the Hellenic Republic. His previous book, Greece: Biography of a Modern Nation, was shortlisted for the Cundill History Prize. He is the four-time winner of the prestigious Runciman Award and lives in Kent, England.
“[The Greeks is] ambitious, a complete ‘reorienting’ of Western history.”—Wall Street Journal

“In this magisterial yet readable introduction to Greek history—one of the best of its kind, whether for academic or popular audiences—Beaton reveals the far more complicated reality.” —Foreign Affairs

“With suave latitude and dependable detail, Beaton takes his readers from a bright prehistoric ‘dawn’ in the Aegean to the heavy skies of contemporary geo-politics.”—The New Criterion

"A century and a half after George Finlay produced his multi-volume History of Greece, Beaton succeeds in offering a concise, entertaining and reliable companion that is a more than worthy successor."—Ioannis D. Stefanidis, History Today

"It is difficult to imagine another anglophone scholar who could have taken on such a project alone, in a single book, and with such superb results.... To write a book on this scale is an act of both intellectual daring and generosity, and it is testimony to Beaton's craft as historian and storyteller that so sizeable a work might still leave one wanting more."—Times Literary Supplement

“This is the story of the Greeks and their global impact told by a master historian.”—The National Herald

“An expansive history . . . with concise clarity, managing to capture the uniquely Greek identity throughout.” —New York Journal of Books

“The book’s wide historic focus offers something for general readers interested in any period of Greek history; particularly good for enthusiasts of Greek antiquity who want to expand their knowledge.”—Library Journal

“A monumental, sweeping history of the Greeks covering more than three thousand years right up to the present day. Authoritative, compelling, and beautifully written. A wonderful book.”—Peter Frankopan, author of The Silk Roads

“A masterpiece, from a towering expert in all things Greek.”—Gregory Nagy, Harvard University

"The peoples who have spoken [Greek] in one version or another over the past 3,500 years are the subject of Roderick Beaton's magisterial new book.... Beaton is probably the only person alive who could manage with such subtlety and authority to convey it in one coherent volume. ...[a] remarkable historical account." —Katherine Fleming

"Roderick Beaton has given us a wonderful big picture of the Greeks, with a very generous cross-cultural, temporal, and geographical sweep. At the same time, the book’s solid detail and careful distinctions—for example, between the Platonic and the Christian vocabulary for "virtue"—should help in discouraging political exploitation of stilted, anachronistic ideas about Greek civilization.”—Sarah Ruden, translator and author of Paul Among the People

"A remarkable and readable book: this single, masterful volume lays out the entire thirty-five-century history of the Greek-speaking peoples. From Minoan to modern times, their triumphs, their tragedies, and above all their endurance are all here. For anyone who wants to understand Greece today, this is the place to start."—Ian Morris, author of Why the West Rules—For Now

“Over three millennia, the locus of the Greek spirit has shifted perpetually. In antiquity it darted about between the cities, harbors, and mountain valleys of the east Mediterranean, moving eventually through the swathes of North Africa, the Levant and southwest Asia where Alexander and his successors held sway. In modern times, it has flowed between the footloose global diaspora and the two volatile states which embody Greekness. In a tour de force, Roderick Beaton has managed to tie this story together in a single compelling narrative, written with deep affection and hard-earned knowledge of all things Greek.”—Bruce Clark, author of Athens: A History

“Histories of the Greeks have so far been written with a classical or a modern bias, but Roderick Beaton does not play favorites: with the vantage-point of a scholar enjoying a deep knowledge of Byzantium as well as all phases of Greek literature, he weaves together a vivid narrative reaching from the age of heroes and lore down to the present. The Greeks emerge not as a single nation but rather as a series of great civilizations. They were often at odds with each other but, in all phases of their long history, contributed cultural capital to the rest of the world. Beaton’s Greeks are always on the move, self-reflexive, and surprising. Their story has not yet been told in a global fashion, as it is here.”—Anthony Kaldellis, Ohio State University

"Professor Beaton, already very well known as a formidable and distinguished exponent of modern Greek history, here expands exponentially his vision and chronological scope and turns his more than competent hand to composing a comprehensive history of Greeks or rather Hellenes from the Late Bronze Age BCE to the present day. His handsomely illustrated and fully documented text is a consistently illuminating encapsulation of the manifold achievements of one of the globe's most creative and inspirational peoples."—Paul Cartledge, A.G. Leventis Senior Fellow of Clare College, Cambridge University, & emeritus A.G. Leventis Professor of Greek Culture