The Accursed Tower: The Fall of Acre and the End of the Crusades (Hardcover) 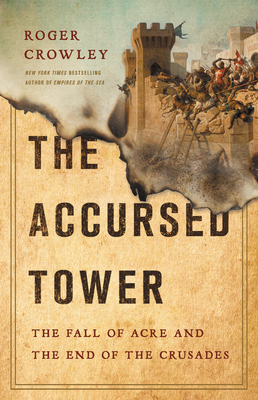 The Accursed Tower: The Fall of Acre and the End of the Crusades (Hardcover)


Usually Ships in 1-5 Days
From a New York Times-bestselling author, a stirring account of the siege of Acre in 1291, when the last Christian stronghold fell to the Muslim army

The 1291 siege of Acre was the Alamo of the Christian Crusades -- the final bloody battle for the Holy Land. After a desperate six weeks, the beleaguered citadel surrendered to the Mamluks, bringing an end to Christendom's two-hundred year adventure in the Middle East.

In The Accursed Tower, Roger Crowley delivers a lively narrative of the lead-up to the siege and a vivid, blow-by-blow account of the climactic battle. Drawing on extant Arabic sources as well as untranslated Latin documents, he argues that Acre is notable for technical advances in military planning and siege warfare, and extraordinary for its individual heroism and savage slaughter. A gripping depiction of the crusader era told through its dramatic last moments, The Accursed Tower offers an essential new view on a crucial turning point in world history.

Longlisted for the Historical Writers Association Nonfiction Crown
Roger Crowley was born in 1951 into a naval family and educated at Cambridge University. The author of numerous bestselling books, including 1453 and Empires of the Sea, Crowley lives near Stroud, UK.
"Crowley's enviable mastery of atmosphere and narrative are on full display in The Accursed Tower, transporting the reader to a Holy Land bursting with exotic and alien sights, smells, and sounds. His recounting of the siege and fall of Acre combines hair-raising action, ferocious savagery, and fascinating characters in an utterly compelling story. For my money, this is narrative history at its best: a living, breathing world full of real people struggling, living, and dying in an epic clash."—Patrick Wyman, PhDand host of Tides of History

"Roger Crowley has once again found a subject worthy of his immense talent. In The Accursed Tower, he brings the climactic stages of the Crusades roaringly to life, as Popes, Kings, and Sultans-in-the-making lead holy warriors into battle alongside Mongols, Mamluks and Templars, fighting for supremacy in the holy land. Here are some of the last great battles of the pre-gunpowder era, marked by thumping cavalry charges and sword thrusts, ingenious siege engines and trebuchets, chain mail and lances, and the terrors of Greek fire. Crowley's gripping account of the fall of Acre is irresistible. It is the kind of book one does not want to end."—Sean McMeekin,author of The Russian Revolution

A bracing work by a
masterly historian whose great knowledge portrays the "dramatic symbolic
significance" of this landmark event.—Kirkus Reviews