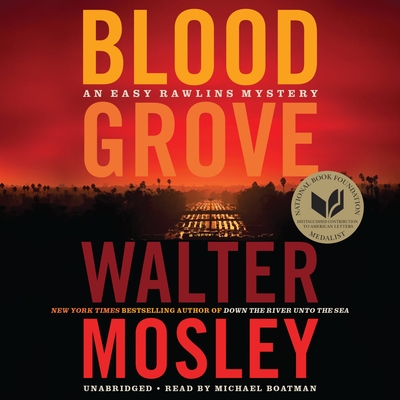 Walter Mosley's infamous detective Easy Rawlins is back, with a new mystery to solve on the sun-soaked streets of Southern California.

Ezekiel "Easy" Porterhouse Rawlins is an unlicensed private investigator turned hard-boiled detective always willing to do what it takes to get things done in the racially charged, dark underbelly of Los Angeles.

But when Easy is approached by a shell-shocked Vietnam War veteran—a young white man who claims to have gotten into a fight protecting a white woman from a black man—he knows he shouldn't take the case.

Though he sees nothing but trouble in the brooding ex-soldier's eyes, Easy, a vet himself, feels a kinship form between them. Easy embarks on an investigation that takes him from mountaintops to the desert, through South Central and into sex clubs and the homes of the fabulously wealthy, facing hippies, the mob, and old friends perhaps more dangerous than anyone else.

Set against the social and political upheaval of the late 1960s, Blood Grove is ultimately a story about survival, not only of the body but also the soul.

Widely hailed as "incomparable" (Chicago Tribune) and "dazzling" (Tampa Bay Times), Walter Mosley proves that he's at the top of his game in this bold return to the endlessly entertaining series that has kept fans on their toes for years.

Walter Mosley is one of America's most celebrated and beloved writers. A Grand Master of the Mystery Writers of America, he has won numerous awards, including the Anisfield-Wolf Award, a Grammy, a PEN USA's Lifetime Achievement Award, and several NAACP Image Awards. His books have been translated into more than twenty languages.