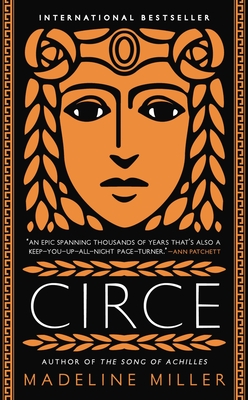 “This remarkable journey into mythology brings the ancient gods directly and viscerally into the present. Circe is a perfect mashup of elegant language, glorious storytelling, and exquisitely modern sensibilities. Miller's telling left me awed and moved by Circe and her story, all while wishing I could invite her over for a glass of wine on the porch. How this amazing author so perfectly melds the human and the divine, creating a story both immediate and epic, is dazzling.”
— Beth Albrecht, The Magic Tree Bookstore, Oak Park, IL

"A bold and subversive retelling of the goddess's story," this #1 New York Times bestseller is "both epic and intimate in its scope, recasting the most infamous female figure from the Odyssey as a hero in her own right" (Alexandra Alter, The New York Times).

In the house of Helios, god of the sun and mightiest of the Titans, a daughter is born. But Circe is a strange child -- not powerful, like her father, nor viciously alluring like her mother. Turning to the world of mortals for companionship, she discovers that she does possess power -- the power of witchcraft, which can transform rivals into monsters and menace the gods themselves.

Threatened, Zeus banishes her to a deserted island, where she hones her occult craft, tames wild beasts and crosses paths with many of the most famous figures in all of mythology, including the Minotaur, Daedalus and his doomed son Icarus, the murderous Medea, and, of course, wily Odysseus.

But there is danger, too, for a woman who stands alone, and Circe unwittingly draws the wrath of both men and gods, ultimately finding herself pitted against one of the most terrifying and vengeful of the Olympians. To protect what she loves most, Circe must summon all her strength and choose, once and for all, whether she belongs with the gods she is born from, or the mortals she has come to love.

With unforgettably vivid characters, mesmerizing language, and page-turning suspense, Circe is a triumph of storytelling, an intoxicating epic of family rivalry, palace intrigue, love and loss, as well as a celebration of indomitable female strength in a man's world.

#1 New York Times Bestseller -- named one of the Best Books of the Year by NPR, the Washington Post, People, Time, Amazon, Entertainment Weekly, Bustle, Newsweek, the A.V. Club, Christian Science Monitor, Refinery 29, Buzzfeed, Paste, Audible, Kirkus, Publishers Weekly, Thrillist, NYPL, Self, Real Simple, Goodreads, Boston Globe, Electric Literature, BookPage, the Guardian, Book Riot, Seattle Times, and Business Insider.
Madeline Miller is the #1 New York Times bestselling author of two novels: The Song of Achilles, which won the Orange Women’s Prize for Fiction 2012, and Circe, which was short-listed for the Women’s Prize for Fiction 2019. Her books have been translated into over thirty two languages. Miller holds an MA in Classics from Brown University, studied in the Dramaturgy department at Yale School of Drama, where she focused on the adaptation of classical texts to modern forms, and taught Latin, Greek, and Shakespeare to high school students for over a decade.
Winner of the 2019 Indie Choice Award
Shortlisted for the 2019 Women's Prize for Fiction
Named one of the 'Best Books of 2018' by NPR, The Washington Post, Buzzfeed, People, Time, Amazon,Entertainment Weekly, Bustle, Newsweek, the A.V. Club, Christian Science Monitor, Southern Living,and Refinery 29.


"Circe,' [is] a bold
and subversive retelling of the goddess's story that manages to be both epic
and intimate in its scope, recasting the most infamous female figure from the
Odyssey as a hero in her own right."—Alexandra Alter, New York Times

"One of
the most amazing qualities of this novel [is]: We know how everything here
turns out - we've known it for thousands of years - and yet in Miller's lush
reimagining, the story feels harrowing and unexpected. The feminist light she
shines on these events never distorts their original shape; it only illuminates
details we hadn't noticed before."—Ron Charles, Washington Post

"[Miller]
gives
voice to Circe as a multifaceted and evolving character...'Circe' is very
pleasurable to read, combining lively versions of familiar tales and snippets
of other, related standards with a highly psychologized, redemptive and
ultimately exculpatory account of the protagonist herself."—Claire Messud, New York Times Book Review

"The story of Circe's entanglement with Odysseus lasts far beyond the narrative of "The Odyssey," making for compelling material to revisit. But ultimately it's as a character that Circe stands apart....Through her elegant, psychologically acute prose, Miller gives us a rich female character who inhabits the spaces in between."
—Colleen Abel, Minneapolis Star Tribune

"Miller's lush,
gold-lit novel - told from the perspective of the witch whose name in Greek has
echoes of a hawk and a weaver's shuttle - paints another picture: of a fierce
goddess who, yes, turns men into pigs, but only because they deserve it."—NPR.org

"so vivid, so layered, you could get lost
in it... Whether or not you think you like Greek Mythology, this is just great
storytelling. It feels cinematic."— NPR's Here & Now

"Spellbinding..Miller
has created a daring feminist take on a classic narrative; although
the setting is a
mystical world of gods, monsters, and nymphs, the protagonist at its heart is
like any of
us."—O Magazine

"Miller's spell builds slowly, but by the last page you'll be in awe. In
prose of dreamlike simplicity, she reimagines the myth of Circe."—People

"Miller, with her academic bona fides and born instinct for storytelling, seamlessly grafts modern concepts of selfhood and independence to her mystical reveries of smoke and silver, nectar and bones."—Entertainment Weekly

"This telling, in the
sorceress's own words, is not the version we think we know."—New York Times 'T Magazine'

"Miller gives voice to a previously muted perspective in the classics, forging a great romance from the scraps left to us by the ancients....Circe is, instead, a romp, an airy delight, a novel to be gobbled greedily in a single sitting."—Aida Edemariam, Guardian

"In Madeline Miller's "Circe" - the gorgeous and gimlet-eyed follow-up to her Orange Prize-winning first novel, "The Song of Achilles" - the goddess is young and romantic enough at the start to feel a tiny bit let down that she's not shackled to a rock like her uncle, Prometheus, getting her liver pecked out each day."

Ambitious in scope, Circe is above all the chronicle of an outsider woman who uses her power and wits to protect herself and the people she loves, ultimately looking within to define herself. Readers will savor the message of standing against a hostile world and forging a new way."—Shelf Awareness

"A retelling of ancient Greek lore gives exhilarating voice to a witch...
[Circe is] a sly, petulant, and finally commanding voice that narrates the
entirety of Miller's dazzling second novel....Readers will relish following the
puzzle of this unpromising daughter of the sun god Helios and his wife, Perse,
who had negligible use for their child....Expect Miller's readership to mushroom
like one of Circe's spells. Miller makes Homer pertinent to women facing
21st-century monsters."—Kirkus, Starred Review

"With lyric beauty of language and melancholy evocative of Keats' "Ode on a Grecian Urn", CIRCE asks all the big questions of existence while framing them in the life story of the famous goddess who had the magic of transformations. A veritable Who's Who of the gods of Olympus and the heroes of ancient Greece, Circe knows them all and we see them through her perceptive eyes. This is as close as you will ever come to entering the world of mythology as a participant. Stunning, touching, and unique."—Margaret George, author of The Confessions of Young Nero

"Circe
bears its own transformative magic, a power enabled by Miller's keen eye for
beauty, adventure, and reinvention. Through the charms of a misfit heroine, the
world of gods becomes stunningly alive, and the world of our own humanity--its
questions, loves, and bonds--is illuminated. This book is an immense gift to
anyone who reads to find their own bravery and quest."— Affinity Konar, author of Mischling

"Madeline Miller, master storyteller, conjures Circe glowing and alive - and makes the Gods, nymphs and heroes of ancient Greece walk forth in all their armored splendor. Richly detailed and written with such breathtaking command of story, you will be held enchanted. A breathtaking novel."—Helen Simonson, author of The Summer Before the War and Major Pettigrew's Last Stand

"Circe is the utterly captivating, exquisitely written, story of an ordinary, and extraordinary, woman's life"— Eimear McBride, author of A Girl is a Half-Formed Thing

"Written with power and grace, this enchanting, startling, gripping story casts a spell as strong and magical as any created by the sorceress Circe."—Mary Doria Russell, author of Epitaph

"Madeline Miller's re-imagining of the witch Circe from The Odyssey makes for an intriguing, feminist adventure novel that is perfectly suited for the #TimesUp moment. Circe is also a smart read that has much to say about the long-term consequences of war and a culture that values violence and conquest over compassion and learning...Miller mines intriguing details from the original tale to imagine a rich backstory for Circe that allows readers to re-visit the world of Olympians and Titans in Greek mythology. From the court of the Titans, the reader meets Circe's parents, the god Helios and nymph Perse, and is introduced to a world of supernatural power players that is every bit as back-biting, gossip-filled and vicious as any episode of House of Cards."

"'Circe' is a
sentence-by-sentence miracle";—Michigan Daily