How to American Lib/E: An Immigrant's Guide to Disappointing Your Parents (Compact Disc) 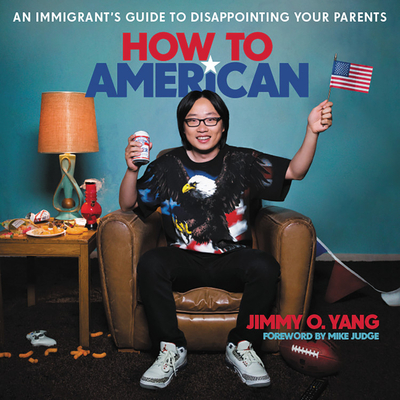 Stand-up comic, actor, and fan favorite from the popular HBO series Silicon Valley shares his memoir of growing up as a Chinese immigrant in California and making it in Hollywood.

Jimmy O. Yang is about to have his moment. You've likely seen the stand-up comic and actor starring as a series regular, the fan favorite character Jian Yang in Mike Judge's Emmy-nominated HBO comedy Silicon Valley. Or you may have caught his first dramatic turn in director Peter Berg's acclaimed film Patriot's Day. Next up: Jimmy O. Yang continues his role as Jian Yang in HBO's confirmed, upcoming fifth season of Silicon Valley; a part in the much-anticipated film adaptation of the national bestseller Crazy Rich Asians; and a major role opposite Melissa McCarthy in the comedy Life of the Party. His family emigrated from Hong Kong to Los Angeles when he was 13. Can you think of a worse time for a young adolescent who didn't speak English to be thrown into the Los Angeles School District with its notorious income gap, mean girls, and children of the Hollywood elite?

In his first book, How to American, Yang shares his stories-always hilarious, often resonant-of learning our customs, assimilating into our culture, and figuring out how to date high school girls who were six inches taller than him, all while enduring the constant pressure from his sometimes overbearing parents to go to medical school and become a doctor. In his book, we see firsthand what Yang's experienced as an immigrant and the things he did and didn't do to progress into a star on the rise. How to American features chapters on a wide range of topics, from How to Thuglife (what Yang learned about America by watching BET's Rap City, three hours of rap music videos a day) to How to Hollywood (making the best of the limited roles given to him, to eventually playing the boyfriend of a white girl in the upcoming Melissa McCarthy star vehicle Life of The Party, the Holy Grail of Asian actors).