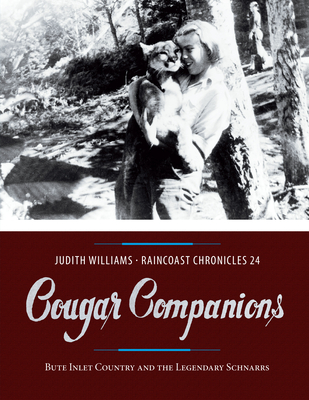 Of the settlers, prospectors, trappers, mountaineers and loggers who came to British Columbia's remote Bute Inlet between the 1890s and the 1940s, few remained long. August Schnarr, however, trapped far up the Homathko and Southgate Rivers and logged the inlet shores from 1910 until the 1960s. An adventurous photographer, August strapped his Kodak camera to his suspenders and captured his mountain climbing, upriver treks and family homestead. His photo collection is a diary of fifty years of an upcoast life.

In this twenty-fourth issue of Raincoast Chronicles, Judith Williams traces the Schnarrs' family story through August's photographs. Included are classic portraits of the pioneering Bute residents posed on wooden boats and floathouses and with giant fish catches and hunting trophies as well as rare 1930s pictures documenting August's daughters with their pet cougars. "They were nice pets, we could pet them and they'd purr just like a cat, and they kept pawing you, don't quit, don't quit," said August's daughter Pansy in an interview with Maud Emery. "They didn't like anybody but us three; they didn't like my dad at all. They were just like cats to us, we didn't think of them as anything special, nothing but a bunch of work."

Richly illustrated, impeccably researched and featuring diaries, interviews and oral history, Raincoast Chronicles 24 illuminates the experience of homesteading on the remote BC coast.