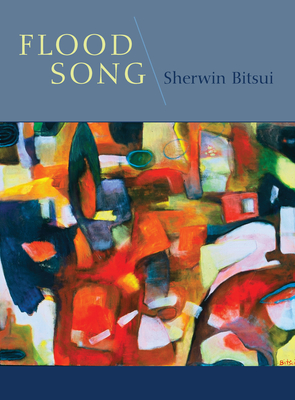 "His images can tilt on the side of surrealism, yet his work can be compellingly accessible."--Arizona Daily Star

"Sherwin Bitsui sees violent beauty in the American landscape. There are junipers, black ants, axes, and cities dragging their bridges. I can hear Whitman's drums in these poems and I can see Ginsberg's supermarkets. But above all else, there is an indigenous eccentricity, 'a cornfield at the bottom of a sandstone canyon, ' that you will not find anywhere else."--Sherman Alexie

Native traditions scrape against contemporary urban life in Flood Song, an interweaving painterly sequence populated with wrens and reeds, bricks and gasoline. Poet Sherwin Bitsui is at the forefront of a new generation of Native writers who resist being identified solely by race. At the same time, he comes from a traditional indigenous family and Flood Song is filled with allusions to Dine (Navajo) myths, customs, and traditions. Highly imagistic and constantly in motion, his poems draw variously upon medicine song and contemporary language and poetics. "I map a shrinking map," he writes, and "bite my eyes shut between these songs." An astonishing, elemental volume.

I retrace and trace over my fingerprints
Here: magma,
there: shore,

and on the peninsula of his finger pointing west--
a bell rope woven from optic nerves
is tethered to mustangs galloping from a nation lifting its first page
through the man hole--burn marks in the saddle horn,
static in the ear that cannot sever cries from wailing.

Sherwin Bitsui's acclaimed first book of poems, Shapeshift, appeared in 2003. He has earned many honors for his work, including fellowships from the Witter Bynner Foundation and Lannan Foundation, and he is frequently invited to poetry festivals throughout the world. He lives in Tucson, Arizona.