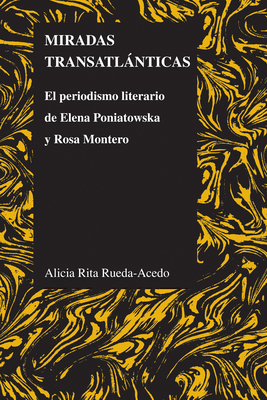 By Alicia Rita Rueda-Acedo
$60.75
Email or call for price.

Women's voices routinely have been muted or omitted entirely when a nation assembles its historical narrative. In Miradas Transatl nticas: El periodismo literario de Elena Poniatowska y Rosa Montero, Alicia Rita Rueda-Acedo examines the relationship between the journalistic and literary work of the two writers named in the title as they utilize a distinct combination of journalism and fiction to create new spaces where women's voices and experiences may be situated prominently in their nations' historical narratives.Rueda-Acedo analyzes the works of the two writers from the perspectives of both gender and genre studies, extending the notion of genre from the literary tradition and applying it to journalistic production. Each of the chapters rethinks and revises the concept of literary genres by arguing for the inclusion of the interview, the reportage, the article, and the chronicle within the category of literature. In her study of Las siete cabritas by Poniatowska and Historias de mujeres by Montero, Rueda-Acedo argues successfully that these are works of homage to women who have influenced history. By interpreting and subverting patriarchal models, the writers draw attention to the ways in which women have engaged Mexican, Spanish, and Universal history. Rueda-Acedo focuses on the characteristics of the journalistic interview and proposes its interpretation as a literary text. A poetics of this genre is also proposed.Rueda-Acedo's study explores how Poniatowska and Montero represent women who have marked history as part of the feminist agenda that the two writers have promoted in their journalistic and literary production. The book also emphasizes the role of the two writers as researchers and critics and deepens the vibrant debate about the relationship between literature and journalism currently being discussed on both sides of the Atlantic.