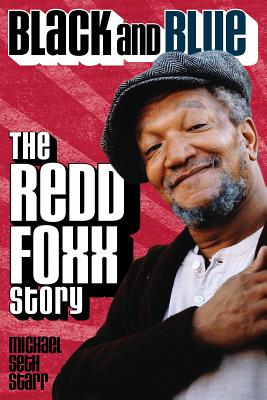 (Applause Books). Black and Blue: The Redd Foxx Story tells the remarkable story of Foxx, a veteran comedian and "overnight sensation" at the age of 49 whose early life was defined by adversity and his post- Sanford and Son years by a blur of women, cocaine, endless lawsuits, financial chaos, and a losing battle with the IRS. Foxx's frank, trailblazing style as the "King of the Party Records" opened the door for a generation of African-American comedians including Dick Gregory, Bill Cosby, Richard Pryor, Eddie Murphy, and Chris Rock. Foxx took the country by storm in January 1972 as crotchety, bow-legged Watts junk dealer Fred Sanford in Sanford and Son, one of the most beloved sitcoms in television history. Fred's histrionic "heart attacks" ("It's the big one, Elizabeth I'm comin' to join ya, honey ") and catchphrases ("You big dummy ") turned Fred Sanford into a cultural icon and Redd Foxx into a millionaire. Sanford and Son took Foxx to the pinnacle of television success but would also prove to be his downfall. Interviews with friends, confidantes, and colleagues provide a unique insight into this generous, brash, vulnerable performer a man who Norman Lear described as "inherently, innately funny in every part of his being.