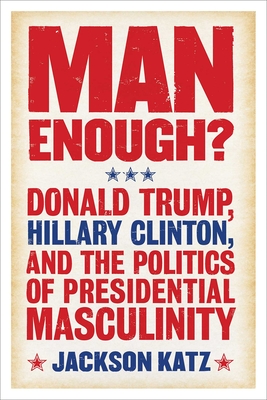 Out of Print - This Title is Unlikely to be Available.
Why has the U.S. never had a woman president? With Hillary Clinton engaged in a historic campaign that could see her becoming the first woman elected president of the United States, the national conversation about gender and the presidency is gaining critical momentum. Commentators have fixated on the special challenges women candidates for the presidency face: endless media scrutiny abGender has always been a crucial factor in presidential politics. In Man Enough? Donald Trump, Hillary Clinton, and the Politics of Presidential Masculinity, Jackson Katz puts forth the original and highly provocative thesis that in recent decades presidential campaigns have become the center stage of an ongoing national debate about manhood, a kind of quadrennial referendum on what type of man—or one day, woman—embodies not only our ideological beliefs, but our very identity as a nation. Whether he is examining right-wing talk radio’s relentless attacks on the masculinity of Democratic candidates, how fears of appearing weak and vulnerable end up shaping candidates’ actual policy positions, how the ISIS attacks on Paris and elsewhere have pushed candidates to assume an increasingly hypermasculine posture, or the groundbreaking quality of Hillary Clinton’s runs for the presidency in 2008 and 2016, Katz offers a new way to understand the role of identity politics in presidential campaigns. In the end, Man Enough? offers nothing less than a paradigm-shifting way to understand the very nature of the American presidency.
Jackson Katz, Ph.D. is internationally renowned for his groundbreaking scholarship and activism on issues of gender and violence. He is the creator of the award-winning educational documentaries Tough Guise and Tough Guise 2, and is the author of The Macho Paradox: Why Some Men Hurt Women and How All Men Can Help. He is featured in the films Miss Representation and The Mask You Live In. He blogs for The Huffington Post, and lectures widely in the U.S. and around the world on violence, media, and masculinities.
"An elucidating, nuanced study of gender and feminist dynamics perfect for our current political moment."

""Katz looks at presidential elections with the provocative thesis that they can be seen as 'competitions not only between divergent political ideologies but also between two (or three) distinct versions of masculinity.' Since 1972, conservatives have profited from emphasizing a masculinity associated with white, middle-class men, and painting liberals as softies only concerned with 'abortion, amnesty, and acid.' The author takes the reader through the elections chronologically, focusing on instances when gender stereotypes figured most prominently, either in reinforcing or challenging patriarchal assumptions... He analyzes Trump's appeal and Clinton's challenges in the current election as well... Thoroughly researched and documented, this book illuminates the intersection of gender, race, and politics.""

""In 'Man Enough?' Jackson Katz builds on recent scholarly work about how Americans conceive of the presidency, but his goal is to push presidential studies toward a more explicit engagement with the idea that the presidency is fundamentally a contest of American manhood. Katz's book manages to be both intellectually exhilarating and highly accessible even as it greatly advances our understanding of presidential politics. It should be widely read by students, scholars, pundits, and political junkies.""
— Dr. Caroline Heldman, Chair, Department of Politics, Occidental College, coeditor of 'Rethinking Madam President: Are We Ready for a Woman in the White House?'

""For years, scholar and activist Jackson Katz has been providing crucial insights into the relationship between cultural representations of manhood and the actual social and economic circumstances of men's lives. In 'Man Enough?', Katz brings his formidable critical skills to bear on contemporary American politics and the US presidency, offering a fresh and fascinating new take on the cultural politics of (white) manhood, with vivid discussions of timely topics such as the Trump phenomenon, the power of conservative talk radio, and the gender issues at play in the response to ISIS. This is first-rate social and political commentary.""
— Sut Jhally, PhD, Professor of Communication, UMass Amherst, Founder-Director, Media Education Foundation

""Every presidential election is a 'masculinity contest,' but rarely have constituencies congealed in such a gendered way as in 2016. Jackson Katz's incisive analysis situates the gendered vitriol in shifting global social and economic contexts, while never losing sight of how individual candidates use gendered themes to make their case. Keep this book next to the remote on election night, mute the blathering pundits, and watch Katz's analysis unfold.""
— Michael Kimmel, author of 'Manhood in America and Angry White Men: American Masculinity at the End of an Era'

""Men who run for office aren't seen as 'playing the gender card,' because culturally, men are the deck. But when women enter the political arena they are always seen through the lens of their gender. Jackson Katz's rigorous work destroys this fallacy. 'Man Enough?' should be required reading for anyone interested in examining how gender norms and racial/ethnic biases shape definitions of leadership, not only in relation to the presidency but in many other areas as well.""
— Soraya Chemaly, media critic and activist, and founder of The Speech Project"