They Broke the Law—You Be the Judge: True Cases of Teen Crime (Paperback) 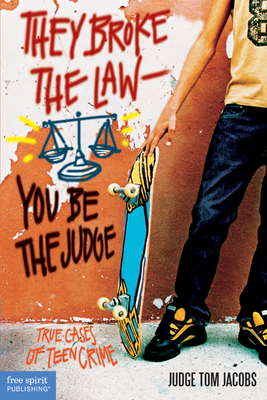 They Broke the Law—You Be the Judge: True Cases of Teen Crime (Paperback)


Usually Ships in 1-5 Days
Teens often hear about other teens who get into trouble with the law. But they’re seldom asked what they think should happen next and why. A unique introduction to the juvenile justice system, They Broke the Law—You Be the Judge: True Cases of Teen Crime invites teens to preside over a variety of real-life cases.

They meet Adam, who makes a threat in school; Erica, who assaults another student and uses marijuana; and more young people who commit crimes and are caught. Like a judge, readers learn each teen’s background, the relevant facts, and the sentencing options available. After deciding on a sentence, they find out what really happened—and where each offender is today.

Along the way, readers learn Judge Jacobs’ concerns about each case, reflect on probing questions, and discover that they can’t jump to conclusions. Teens (and teachers) who want more can find role-playing ideas and scenarios related to the stories available as free downloads here on the Free Spirit Web site.

Thought-provoking and eye-opening, this book is for all teens who want to know more about the juvenile justice system and the laws that pertain to them and their peers.

Thomas a. Jacobs, J.D., was an Arizona Assistant Attorney general from 1972–1985, where he practiced criminal and child welfare law. He was appointed to the Maricopa County Superior Court in 1985 where he served as a judge pro tem and commissioner in the juvenile and family courts until his retirement in 2008. He also taught juvenile law for ten years as an adjunct professor at the Arizona State University School of Social Work. He continues to write for teens, lawyers, and judges. His recent articles on teens and the law have been published in The New York Times and New York ParentGuide. His previous books include What Are My Rights? and Teens Take It to Court. Judge Jacobs also maintains the popular Web site “Ask the Judge: Answers for Teens About the law” at www.askthejudge.info.
“A refreshing and completely unique resource.”—Youthworker

“Unusual and thought-provoking . . . with the proliferation of courtroom shows on television, this book gives young people a more realistic look at the legal system designed for them.”
— School Library Journal

“An excellent introduction of how juvenile justice works...great resource for classroom and group discussions.”
— Booklist