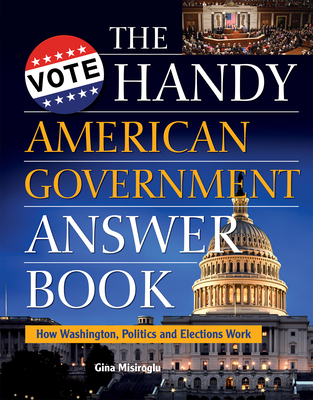 A practical, accessible, engaging, and comprehensive guide to how American democracy works (and how it sometimes doesn't work).

The stakes have never been higher: national security, civil liberties, the economy, the future of the republic. Yet few outside Washington actually understand how our government and political system should work, much less how it actually operates. On one level, it's a complex, interlocking world veiled in power brokering, bureaucracy, and big money. On another, it's the biggest, richest, most influential organization in the world, for better or worse.

Understanding how modern America is managed and governed is more vital than ever, but television, radio, newspapers, and social media frequently aim to spin, seduce, and sell product rather than serve anything resembling the truth. Filling the breach and answering basic questions about how our very complex government operates and what it promises, The Handy American Government Answer Book: How Washington, Politics, and Elections Work takes a comprehensive look at the systems, people, and policies that comprise American democracy, providing much-needed clarity to the current political drama.

This informative book traces the historic development of the government, the functions of each branch of government, and how they work together. It provides clear and concise definitions of who does what and why. Written in an entertaining, reader-friendly, question-and-answer format, The Handy American Government Answer Book deciphers the news behind the headlines through well-researched answers to nearly 800 common questions. You will also read about such fascinating tidbits as
Why is America's democratic system considered so precious? How are shifting demographics related to the electorate? What can Americans do to influence their government? Did the framers of the Constitution place equal weight on the concepts of liberty, equality, and democracy? What does checks and balances mean? What generally happens when members of Congress act inappropriately? How many presidents have been impeached? How does a case reach the U.S. Supreme Court? Which president appointed the most justices? How do civil liberties differ from civil rights? How does the Bill of Rights protect individual liberties? Is measuring public opinion a new phenomenon in politics? What does the concept ?majority rule with minority rights? mean? Why has trust in the government declined? What does it mean to lobby? How are PAC donations and political decisions linked? Where do the party symbols of the donkey and the elephant come from? What is electoral realignment? Who pays for the campaigns of candidates? Did the electoral college ever vote unanimously for a president?

This handy primer also includes numerous illustrations, graphs, tables, a helpful bibliography, and an extensive index, adding to its usefulness. In the midst of the overheated rhetoric of the moment and the fast-changing, crisis-dominated world, a well-informed citizenry armed with The Handy American Government Answer Book is the best defense against political and corporate chicanery.

Gina Misiroglu has authored or edited more than three dozen books in the popular culture, biography, American history, folklore, and women studies genres. She holds two degrees from UCLA and has worked in various editorial capacities for publishers such as Price Stern Sloan, New World Library, Visible Ink Press, Facts On File, and Routledge. She has contributed to or authored several 'Handy Answer Book' titles, including The Handy Answer Book for Kids (and Parents) and The Handy Politics Answer Book. Additional notable works include the three-volume American Countercultures: An Encyclopedia of Nonconformists, Alternative Lifestyles, and Radical Ideas in U.S. History, winner of the 2010 RUSA Award for Outstanding Reference Source; The Superhero Book: The Ultimate Encyclopedia of Comic-Book Icons and Hollywood Heroes; and the trade anthology Girls Like Us: 40 Extraordinary Women Celebrate Girlhood in Story, Poetry, and Song, winner of the New York Public Library's 'Best Book for Teens' Award. Misiroglu lives in Los Angeles and is proud to say she votes in every national and local election.