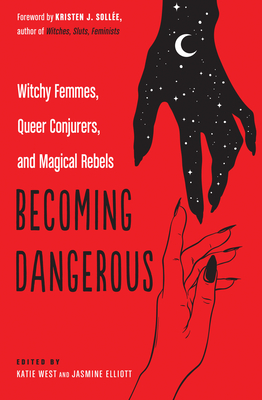 "A fierce and voluble refutation of the patriarchy and its soul-crushing oppression of female power. These writers make clear that as witches, femmes, and queers, they will use their own strength, ingenious rituals, beauty routines, and spells to rise above and beyond the limits of racism/classism and objectifications set by a male-dominated society. While bound by a thread of magic, these are inspiring feminist writings for readers of feminist literature, however identified.” --Library Journal

Edgy and often deeply personal, the twenty-one essays collected here come from a wide variety of writers. Some identify as witches, others identify as writers, musicians, game developers, or artists. What they have in common is that they’ve created personal rituals to summon their own power in a world that would prefer them powerless. Here, they share the rituals they use to resist self-doubt, grief, and depression in the face of sexism, slut shaming, racism, patriarchy, and other systems of oppression.

Katie West is a writer, photographer, editor, director, and executive assistant. She was recently published in The Secret Loves of Geek (Dark Horse, edited by Hope Nicholson). She has published several volumes of a photographic magazine called Babefest that brings women together to create, share, and support one another. She also directed the music video for the Seven Saturdays single "Au Revoir," and she has a comic with Ray Fawkes in the upcoming anthology Haunted Tales of Gothic Love (Bedside Press, edited by Hope Nicholson).  Jasmine Elliott is a freelance editor and writer. She holds an MA in creative writing from the University of Windsor. She is a lapsed tarot reader and perpetually annoyed queer person currently based in Toronto. You can read her reviews of young adult literature at dictura.com.  Kristen J. Sollée is the author of Witches, Sluts, Feminists.

"This isn't a book on how to become a witch. Rather, it's a book about what it means to be a witch, written by women and femmes for whom the word "witch" is as much a part of their identity as their skin, their sexuality, and their gender. Ultimately, though, this is a book about magic, real, operant magic, the kind which changes reality. It's a book about where that magic comes from, and how queer women and femmes, women of color, and trans women have used it since the dawn of humanity to survive in a world which would just as soon have them enslaved or dead." --Misha Magdalene, Patheos
— Misha Magdalene

"Whether harnessing the power of nature, tarot, crystals and candles or selfies, make up, video games and sex toys, these rebels, sluts, femmes, and witches heal from trauma, challenge institutional racism, dismantle misogyny, and create community. Replete with prose that is at turns revealing, relatable, and bitingly funny, this book lays the groundwork for summoning your own salvation on your own terms." --Kristen J. Sollée, author of Witches, Sluts, Feminists: Conjuring the Sex Positive
— Kristen J. Sollée

"In this uneven yet bold collection of essays, 21 authors explore how they “resist the onslaught of a world of irrational happenings” by performing personal rituals that incorporate magic. Each essay is by someone who considers themselves marginalized and responding to a culture that “has attempted to cast a banishing spell” on them. Highlights include “Trash Magic” by Miranda Elizabeth, a self-described “sick mad crip borderline witch” who tweaks tarot readings and crystal rituals to suit the needs of her “disabled perspective” and Avery Edison’s “Before I Was a Woman, I Was a Witch,” which details Avery’s discovery of a witch kit as a teenager. A common thread is the subversion of conventional feminine beauty, such as in Catherine Hernandez’s “Femme as in Fuck You” in which she writes of taking intentionally ugly photos to reclaim her sense of beauty after an accident that left her scarred, and merritt k’s “Total Mood Killer,” about how she fashions her nails for peak scariness, “sharp enough to easily scratch skin—maybe draw blood.” Powerfully intimate and angry yet hopeful, these narratives will appeal to “magickal practitioners” looking for new examples of how others have dealt with oppression." --Publishers Weekly, (Apr 2019)
— Publishers Weekly

“Thoughtful and earnest, considered together these essays weave a spell, taking the acts of women deemed selfish and silly and naming them sacred. Witches are having a moment. And it’s about damn time.” —Kelly Sue DeConnick, Bitch Planet and Pretty Deadly
— Kelly Sue DeConnick

“Becoming Dangerous is an essential survival guide for underrepresented communities who still have to fight for visibility in these so-called modern times.” —Alison Nastasi, Flavorwire.com
— Alison Nastasi

“Witchcraft specifically is appealing to the marginalized because witchcraft focuses on how the self and the earth are connected. It takes societal hierarchy out of the equation. . . . The contributors to Becoming Dangerous are a multi-faceted group of individuals and writers who have all found their power through dealing with personal hardship and establishing magical rituals. Their rituals vary from using fashion to combat societal sexualization, to buzzing off their hair to explore presentation and identity, and using special rituals to prove to the world that they are human and not less than. This new collection of essays about ‘ritual and resistance’ will fire you up and make you feel powerful.” —HelloGiggles.com
— HelloGiggles.com

"This essay collection describes the many ways that women, femmes, and nonbinary people find and create safe places as acts of resistance, beauty, and hope. Editors Katie West and Jasmine Elliott curated a magnificent collection that includes authors of many different backgrounds, abilities, identities, cultures, and beliefs. Becoming Dangerous debates with itself, answers its own questions, and provides a powerful look at how magic and intention can turn the tide of self-doubt and empower women, as it has for centuries, in both public and secret practices." –Foreword Reviews
— Foreword Reviews

“In essay after essay, the reckoning is a fierce and voluble refutation of the patriarchy and its soul-crushing oppression of female power. These writers make clear that as witches, femmes, and queers, they will use their own strength, ingenious rituals, beauty routines, and spells to rise above and beyond the limits of racism/classism and objectifications set by a male-dominated society. While bound by a thread of magic, these are inspiring feminist writings for readers of feminist literature, however identified.” --Library Journal, April 1, 2019
— Library Journal